Eisteddfod founder's son is guest of honour at Llan 2016 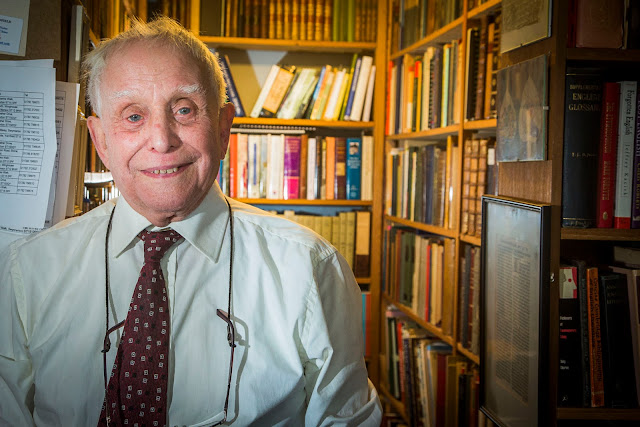 * Peter Tudor at home in Staffordshire.
The son of the man who founded the Llangollen International Musical Eisteddfod is to be a guest of honour at the 70th festival next July.
Peter Tudor, now 84, remembers how his father, visionary Welsh journalist Harold Tudor, came up with the idea of a grand cultural gathering to help heal the scars left by World War Two.
Peter vividly recalls the excitement generated as competitors from across Europe began to gather for the first festival in the small Denbighshire town in the summer of 1947.
Oxford graduate Peter, now living near Stone in Staffordshire, even played a part by volunteering as a messenger boy and later returned to sing in one of the famous choral competitions.

He said: “My father was originally from Tanyfron, near Coedpoeth, and after attending Grove Park School in Wrexham started work as a sub-editor on the Post and Echo newspapers in Liverpool.
“During the Second World War he also became a member of the British Council, an organisation specialising in international educational and cultural opportunities.
“That meant him doing quite a lot of public relations work with representatives of foreign governments in Britain, including people such as the Czech foreign minister Jan Masaryk and the King of Norway, to mention just a couple.
“At the end of the war he thought to himself what a terrible business it had been and was looking at things people could do to prevent it ever happening again.
“He came up with the idea of an international gathering of singers and dancers and suggested the idea to the board of the National Eisteddfod who I don’t think were too keen on it.
“He then approached W S Gwynn Williams, a leading figure in Welsh music who lived in Llangollen, and he gave his support.
“My father was obviously very persuasive and worked very hard to get the idea accepted, which it eventually was and Llangollen was chosen as the ideal location with my father being appointed honorary director of publicity.”

Peter, who won a scholarship to Oxford University and went on to work in a series of university libraries including the Bodleian in Oxford, Glasgow, Manchester and Keele before his retirement, added: “For the very first Llangollen International Eisteddfod myself and some of my school friends from Grove Park acted as messenger boys.
“We were wearing Press badges and it was our job to run from one part of the field to another delivering messages to various people. It was great fun.
“It was just marvellous to see people coming to Llangollen from all parts of Europe and to be able to meet and talk to them.
“While the competitions in the Eisteddfod were pretty quiet affairs with everyone silently paying attention, once they were outside on the field it was a completely different matter and everyone mixed together to chat and laugh.
“You also had one or two of the choirs joining forces to sing the same piece.
“The following year I was back at Llangollen as a member of the Coedpoeth Youth Choir. We sang on the stage and came second in our competition.
“That same year my father arranged for the Rhos Male Voice Choir to take part in a concert in Spain and he and my late mother, Marjorie, went with them.
“As a result of that visit the Spanish decided to have their own version of the Eisteddfod and in 1949 I took part in the event, held in Madrid, with the Coedpoeth Youth Choir.
“I kept on going back to Llangollen for a few years until I was called up for my National Service with the army.
“My father also became much less involved with the Eisteddfod after he took a job as a sub-editor with the Post and Mail in Birmingham.
“The family moved to live in Northfield in Birmingham and my father died at the age of 79 in 1986.

“The part he played in founding the International Eisteddfod wasn’t always too well remembered but has been better acknowledged more recently. I am certainly very proud of what he did.”
Peter, who was married to his wife Eirwen for 51 years and has been a widower since 2008, has two daughters – the eldest of whom, Gillian, followed in her grandfather’s footsteps by becoming a Reuters foreign journalist – and five grandchildren.
In 2003 his close family connection with the founder of the Eisteddfod was celebrated when he was invited to meet the Prince of Wales when he paid an official visit to the festival and four years later he was asked back to Llangollen to give a speech about his father from the pavilion stage.
“Being able to meet the Prince of Wales was a memorable experience and after sitting next to him for one of the performances I got to speak briefly to him over refreshments,” said Peter.
“Apart from those two occasions I haven’t been back to Llangollen but I’m going to do my best to be there for the 70th Eisteddfod next year as the festival is something which has always meant a great deal to my family and myself. I also send my very best wishes to everyone involved in the 2016 Eisteddfod which should be a very special occasion.”
Eisteddfod Chairman Rhys Davies said: “We’ll be delighted to welcome Peter here again as his father was the man who really began this great festival.
“Harold Tudor was a man of great vision and the Eisteddfod and people not just in Llangollen but all over the world have a great deal to thank him for.”
The Llangollen International Music Eisteddfod has been held every summer since 1947 and is recognised as one of the world’s most inspirational music festivals.
Next year’s event, the 70th to be held, will feature star names Bryn Terfel, Katherine Jenkins and Jools Holland and his Rhythm and Blues Orchestra who will bring the curtain down on the festival on Sunday, July 10.
This year’s Eisteddfod begins on Tuesday, July 5, when superstar Katherine Jenkins gets things off to a sensational start as she sings Bizet’s Carmen while Wednesday will be International Children’s Day and will include choral and dance competitions and also a new Under 16s solo competition.
Thursday will be Voices of the World and the crowning of the Children’s Choir of the World while Friday will celebrate Rhythms of the World and will be dedicated mainly to the dance groups with the Dance Champions of the World competition climax in the evening.
In a change of the scheduling Friday will also see the Parade of Nations, led by Eisteddfod President Terry Waite switched from its usual Tuesday in anticipation of bigger crowds and more competitors being present.
Saturday is dedicated to the Choirs of the World and concludes with the Choir of the World competition for the Pavarotti Trophy while Sunday sees the Eisteddfod let its hair down for Llanfest before the climactic final concert.
The incredible Llangollen welcome and atmosphere won’t change though and throughout the week the field will be the scene for impromptu outbreaks of music and dance while the outdoor stages will host a variety of concerts and performances.
Food, drink and craft stalls also surround the field and visitors can dine on a difference cuisine every day of the event and enjoy the colour and excitement of what is a true carnival of nations.
* For more information on Llangollen 2016 go to the website at www.international-eisteddfod.co.uk or onto Facebook at www.facebook.com/llangollen
Posted by llanblogger at 7:55 AM