Operatic gets audience swinging into Christmas 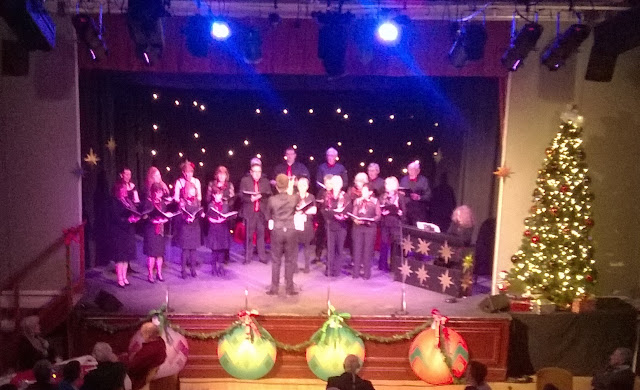 * The Operatic's Christmas show was a feast of festive fun.

Llangollen Operatic Society infused a packed audience with a massive dose of Christmas spirit during their glittering seasonal show at the Town Hall last night.


Swing Along A Christmas was a real cracker of a production featuring a host of songs and sketches from a range of talented performers.
Perfect choice for host was Louise Cielecki, a graduate of the society’s own Young ‘Uns junior section who is now studying drama.


Her bubbly character got the whole thing off to fizzing start as she split the audience into two halves and encouraged them to compete in roaring out the loudest `merry Christmas’.
A large contingent from the Operatic hit the stage with stylish number from the musical Polar Express before around half a dozen members of the Young ‘Uns appeared to sing snatches from their forthcoming production of Honk! which hits the stage early next year.


Multi-talented is the right term for Michael Jenkins who was next in the evening’s line-up.
Taking time off from directing the panto Aladdin at the Stiwt in Rhos, he found time to conduct the Operatic’s choral contributions in this show, do a couple of solo numbers himself and also take part in comedy duet.


His solos - including the Bing Crosby evergreen White Christmas set to a swinging rhythm – helped underline the seasonal tone and later he joined Louisa Jones in the old Dean Martin winter warmer, Baby It’s Cold Outside.
Host Louise hung up her mic for a while to join fellow Young ‘Uns alumni Nathan Lloyd in a neat comedy sketch which ended in a song before the Operatic choristers were back to keep up the pace with a number of their own.


Philip Main stepped out from the chorus to give an astonishing countertenor – or perhaps falsetto – rendition of Panis Angelicus.
Another admirable voice, that of Lizzie Richards, then brought us the stunning Let it Go from the musical Frozen, a real showstopper to end the first half.


Ross Wilson led the charge into the second part of the show with two genuine Rat Pack-style swingers, Dean Martin’s Ain’t That a Kick in the Head and Michael Buble’s Feeling Good.
A neat atmospheric touch came when Ross took his performance out into the heart of the audience.


Louise and Nathan returned for a second two-handed comedy routine and song, followed by the Operatic singers with Winter Wonderland.
A new Operatic star appeared in the east when Dan May strode on stage to present a soulful interpretation of When a Child is Born in his debut performance before an audience.


Alison Ravenscroft came out next with a cheekily neat Baby It’s Cold Outside – perhaps, as host Louise joked, a little unexpected from a lady who played the Mother Superior in the Operatic’s recent smash-hit production of Sister Act.
Lizzie Richards and Ross Wilson joined vocal forces for Let it Snow, leaving the entire Operatic team to round off with Jingle Bell Rock.


The audience then got their chance to join in the fun by singing along with Twelve Days of Christmas and We Wish You a Merry Christmas, sending us out into the night with all those fantastic tunes still ringing in our heads.
A pity the Operatic had just one night for their festive entertainment feast as this show could have run and run.
Posted by llanblogger at 10:24 AM