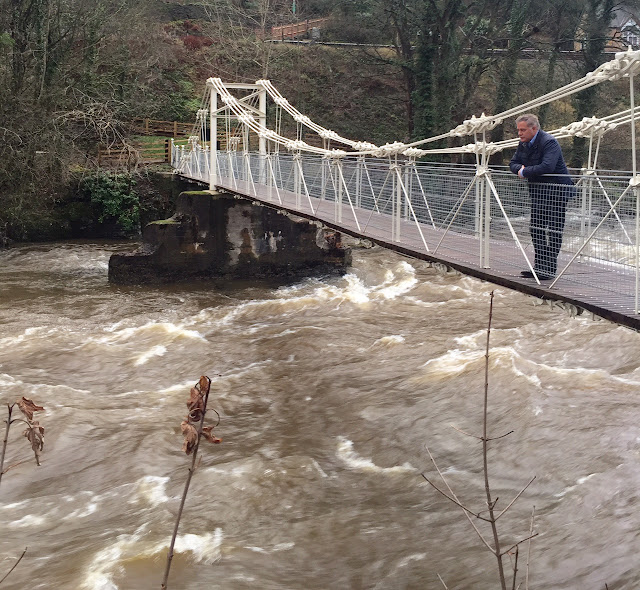 * Simon Baynes on the Chainbridge near Llangollen on Wednesday.
Simon Baynes, Prospective Welsh Conservative Assembly Member for Clwyd South, says farmers and residents have expressed their concerns to him about flooding.
Water levels are currently receding but a few days ago there was extensive flooding in several areas.
Yesterday (Wednesday) Mr Baynes visited Llandrillo, Cynwyd, Corwen, the Chainbridge Hotel and Llangollen.
He said he spoke with local residents and was relieved to see water levels were down even though the River Dee was still flowing very strongly.
On Monday, Captain John and Mary Ormrod, who farm near Bangor-on-Dee, showed him the widespread flooding across their land from both the River Clywedog and the River Dee.
In Bangor-on-Dee, local resident and retired magistrate Michael Bishop commented on the water level under the bridge and discussed the flood avoidance measures that have been taken in the town in recent years.
Mr Baynes said: “Farmers I have spoken with are particularly concerned about the upstream management of the River Dee and very keen that Natural Resources Wales should better manage the river, its tributaries and surrounding land in a way that will mitigate flooding downstream.
“It is important that the Welsh Government, like the Westminster government, provides generous emergency relief where needed and constantly reviews its flood prevention measures.
“If you are concerned about further flooding, you can sign up for Natural Resources Wales Floodline Warnings Direct service. Please call Floodline on 0345 9881188."
Posted by llanblogger at 6:59 AM