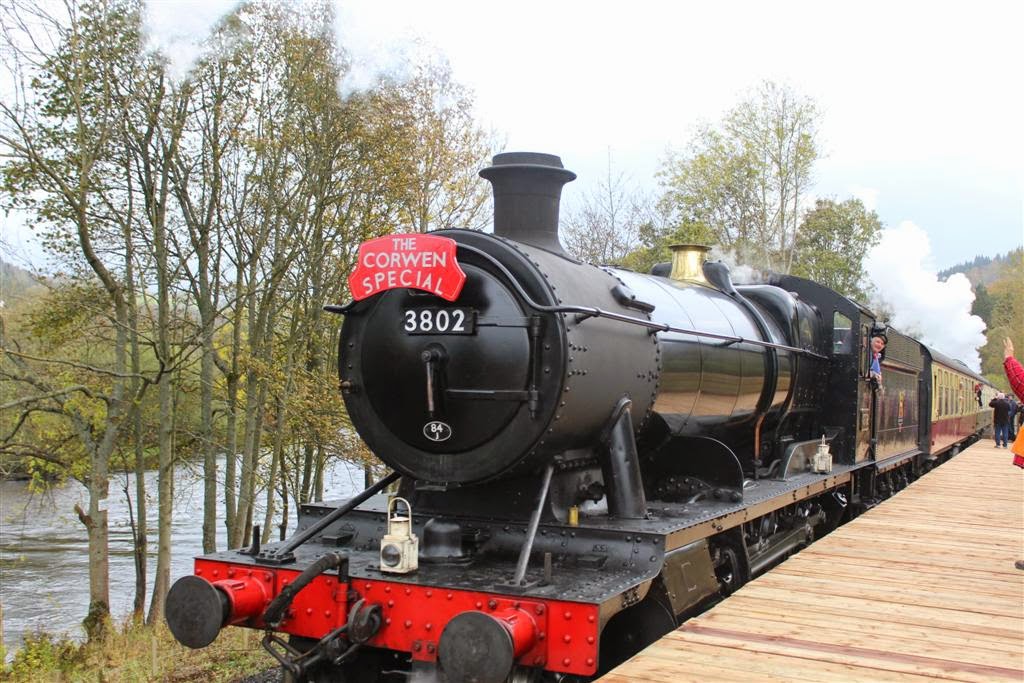 * One of the Special trains at the platform in Corwen.

Trains are now running between Llangollen and Corwen for the first time in almost 50 years.

The operation of a sequence of three Corwen Specials heralded the arrival of the Llangollen Railway at the temporary station platform of Dwyrain Corwen East earlier this week.


The first two trains provided the opportunity for supporters of the Corwen Appeal and volunteers to celebrate the completion of the extension west from Carrog.


The first train with No.3802 leading and Black 5 45337 on the rear arrived on time at 11.35 having run non-stop from Llangollen.
A large crowd of townsfolk were on hand to welcome the train and the regional media gave the occasion extensive coverage.
After a brief ten minute stop over the train reversed out.

Later the Black 5 lead the second train into the platform after 3802  had detached at Carrog, and the third train saw 3802 on the front for the final run.

Again crowds turned out from Corwen and district to witness this historic occasion. Many older people said they remembered the last days of trains in Corwen nearly 50 years ago and others recalled their childhood taking the school train to Bala.

The topping and tailing of the five coach train was specially arranged for this opening day, but showed how uneconomic such an operation would be for the course of normal day-day running.


The daily service, which operates in half term week from 27 October, will be hauled by one engine.

In the absence of a run round loop at the temporary terminus, the train will be propelled back to Carrog under the control of a driver in the PCV (Propelling Control Vehicle) at the rear of the train. Run round of the locomotive will take place at Carrog and the timetable reflects this operation.


The 2014 season of trains will conclude with Remembrance weekend trains operating to Corwen 8/9 November.


The post Christmas Mince Pie Special Trains will operate to Corwen from 26 December. There after a formal opening ceremony at Dwyrain Corwen East is planned for St David’s Day, 1 March 2015, followed by a full season of trains in 2015.


George Jones, for Llangollen Railway Trust, said: “This project has been a great challenge, but its completion a great achievement for all those involved in the many aspects of its construction. The further challenge is to tackle Phase 2 and build the proper terminus nearer to the town centre.”
Posted by llanblogger at 11:22 AM