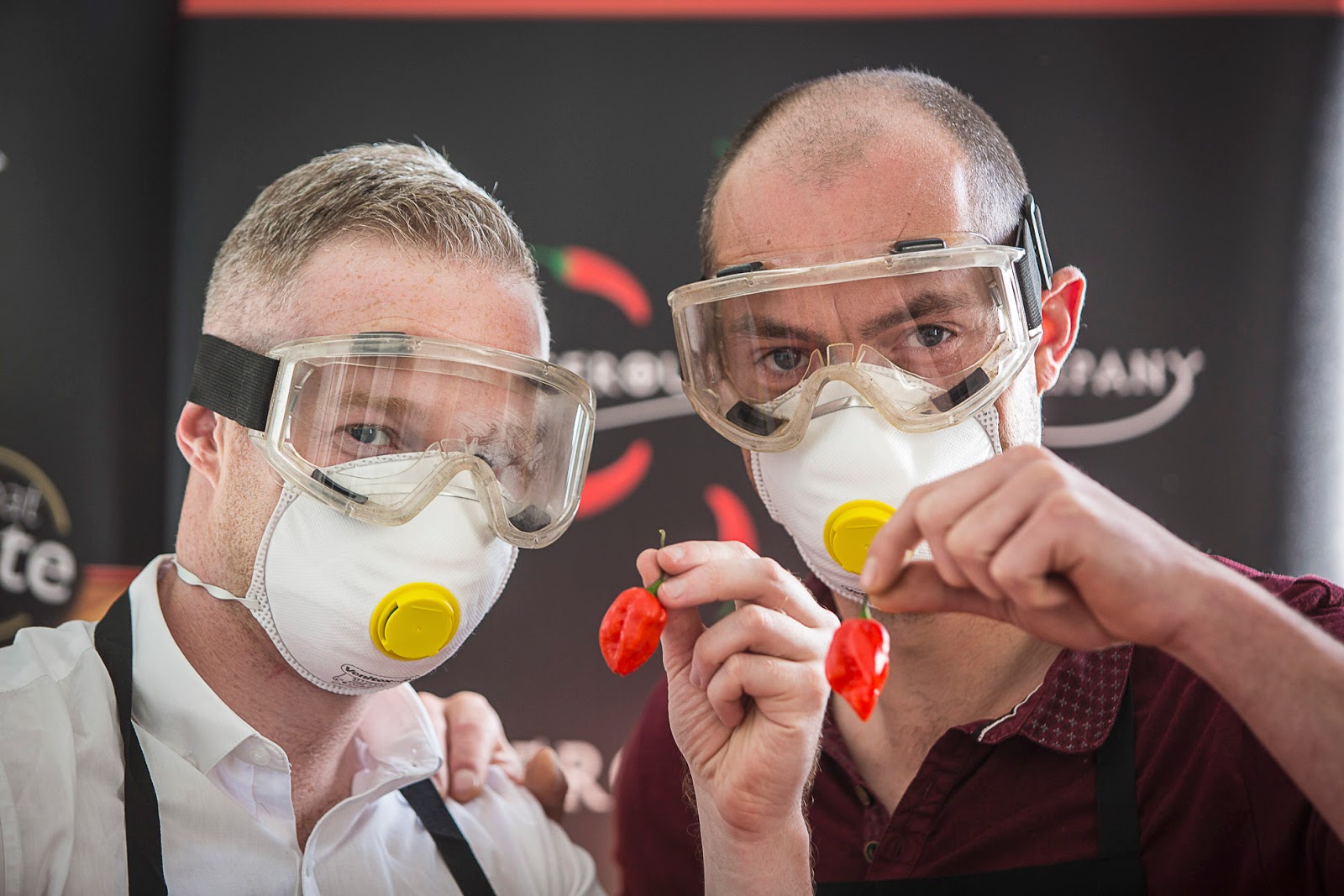 * Living dangerously: Dominic Haynes and Llyr Jones.
Two friends have turned their love of chilli peppers into a red hot business - after donning face masks and protective clothing to get it going.
Dominic Haynes and Llyr Jones, who launched their enterprise after being made redundant, came up the idea of creating a chilli jam while sat in their local pub.
They had to wear protective gear to create their first jars of jam in Dominic’s kitchen using ghost chillies – judged one of the hottest varieties in the world.
Their Dangerous Food Company is now going from strength to strength, winning a Great Taste award in September, and will be unveiling their latest products at Hamper Llangollen food festival this weekend, October 18-19.
Supported by rural development agency Cadwyn Clwyd, the event in Llangollen’s Royal Pavilion is recognised as one of the UK's top 10 food festivals.
Cadwyn Clwyd’s contribution comes via the Rural Development Fund for Wales 2007-2013, which is funded through the European Agricultural Fund for Rural Development (EAFRD) and the Welsh Government.
This year’s festival sees a quartet of Wales’s best chefs take a starring role. Graham Tinsley, executive chef at Carden Park in Cheshire and Conwy’s Castle Hotel, will be cooking up a Welsh feast with Mike Evans, hospitality lecturer at Coleg Llandrillo, Rhos on Sea, and Dion Jones, one of Europe’s finest young chefs.
The ever popular Dai Chef, now the resident chef at Bodnant Welsh Food, the centre of excellence for Welsh food in the Conwy Valley will be there too.
The two 31-year-olds, who live just 80 yards apart in St Asaph, were both working for an Irish dairy company when they came up with the idea of combining chillies with British fruits to make a spicy relish to go with cooked meats, cheese, fish and vegetarian dishes, explained Dominic, from St Asaph.
“We were pitching the idea to Asda about a ready-made chilli jam to go with cheese but we didn’t really think the variety was very good. So we were sat in the pub talking about it and decided that we could make our own.
“It took us 38 attempts at making it – some of them definitely not fit for human consumption - before we finally came up with a version that we liked and started to trial it with our friends.
“Then we were both made redundant so we decided to start up in business together, as we’d already worked together for 10 years. At first we made it in my kitchen -although it had just been refitted after the floods. However, making vast quantities of chilli jam in a tiny kitchen in a cottage did have some drawbacks, particularly the smell.
“Now we have a base in St Asaph, at the Old Courthouse, and the jams are made at Patchwork Foods in Ruthin for us, as we needed a food production base that met strict criteria.
“The staff still have to wear protective clothing though, especially when they make the ghost chilli variety, as it’s so hot.
“We have met some officials in the food industry who find it difficult to understand how our products are classed as a jam. However, we can call jam that because of the fruit and the sugar content.”
They now make around 1,000 jars a week of their jams, in five varieties, all of which will be on sale at Hamper Llangollen food festival  - red chilli with a hint of lime, jalapeño with bramley apple, habanero with mango, bird’s eye with morello cherry, and the hottest: ghost chilli with blueberry.
Ghost chillies, also known as bhut jolokia, measure up to 1.5million on the Scoville scale – the universally accepted gauge of hotness – making it one of the hottest chillies available.
Dominic, a former pupil of Blessed Edward School, Rhyl, concentrates on business development and marketing for the company while Llyr, who grew up in Bala, looks after the production side. They are planning to expand by taking on a new part-time worker to help them at food festivals and other events.
The Dangerous Food Company’s jams are on sale at 20 outlets in North Wales, including Tweedmill Shopping Outlet’s new Farm Shop along with Bodnant Welsh Food Centre and local farmers’ markets. They are also available to buy online at www.dangerousfoodco.co.uk
Helen Roberts, from Cadwyn Clwyd, said: “Hamper Llangollen will be a great showcase for a wide variety of food and drink producers, all of which are helping to boost the economy of this part of North Wales.
“The Dangerous Food Company is a wonderful example of how two friends can create their own business, putting their dreams into action, and we are delighted to be able to bring their products to the attention of the thousands of people who will be visiting Llangollen later this month.”
For more information about Hamper Llangollen 2014 visit  www.llangollenfoodfestival.com
Posted by llanblogger at 7:03 AM