Beatriz to serve up Spanish dishes at food festival 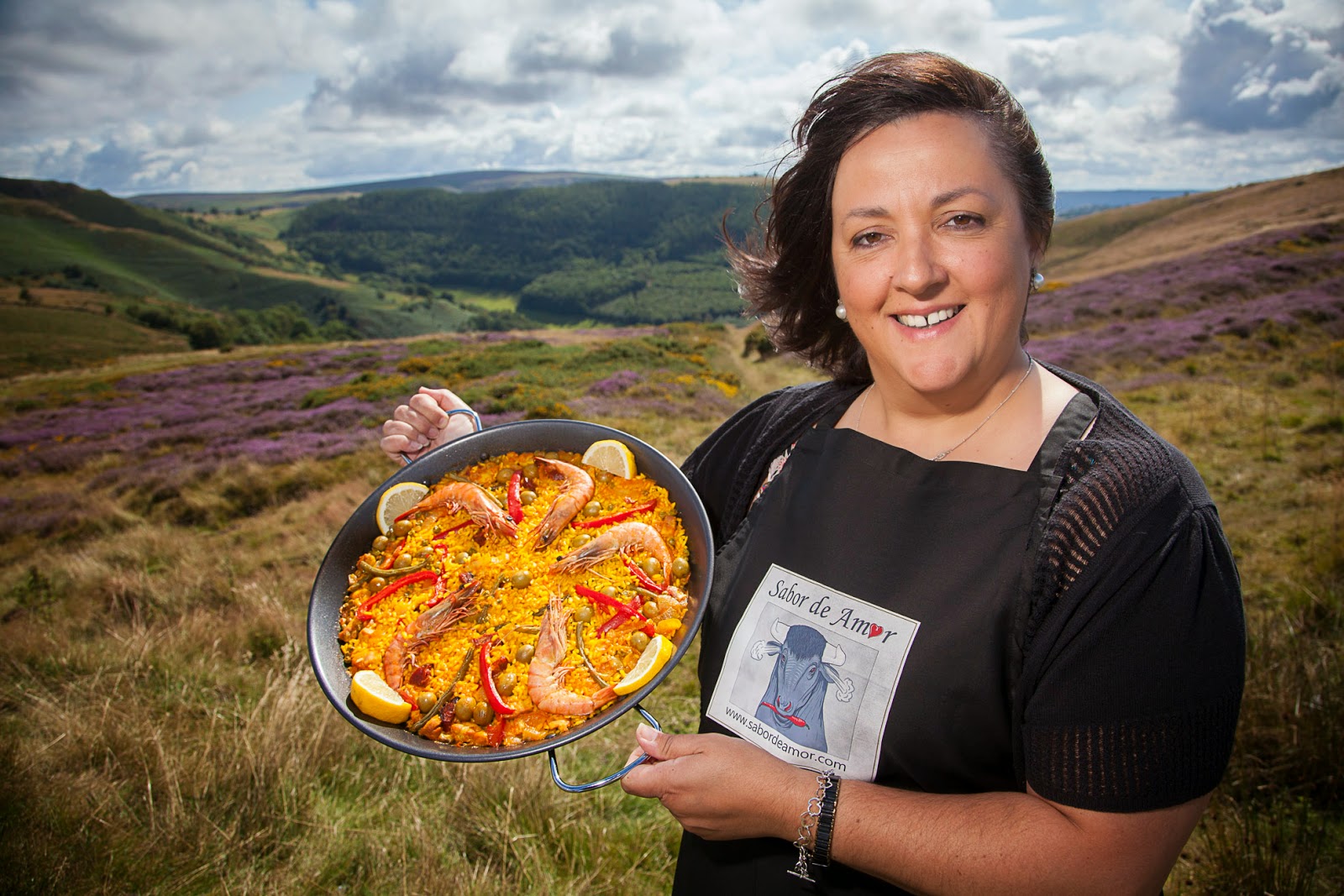 * Beatriz Albo with one of her paella dishes.

A former research scientist who worked at a college on Deeside is recreating the dishes that her gran served up at the family’s award-winning restaurant in Spain.

Beatriz Albo has left the lab behind to spend more time in the kitchen at her home in Brymbo, near Wrexham, where she’s cooking up dishes she learned as a child from her gran Teresa, back home in the ancient city of Salamanca, a Unesco World Heritage Site.
She’s just set up her own company Sabor De Amor – named after her favourite song - while her version of paella along with Spanish specialities  chanfaina, garlic sauce aioli and olive tapenade are  winning plaudits among her growing number of fans.
Beatriz’s culinary creations will be on sale at Llangollen Hamper this weekend, now recognised as one of the UK's top 10 food festivals, which is supported by rural development agency Cadwyn Clwyd.
Cadwyn Clwyd’s contribution comes via the Rural Development Plan for Wales 2007-2013, which is funded by the European Agricultural Fund for Rural Development (EAFRD) and the Welsh Government.
According to Beatriz, Hamper Llangollen will the perfect shop window for her Spanish cuisine.
She said: “I’ve only been going a few months so I was very pleased to be accepted as an exhibitor by Hamper Llangollen – it will be a real chance to showcase my dishes to a much wider audience.”
Now a mum of two, Beatriz first came to the UK aged 24 to work at Deeside College, now part of Coleg Cambria, researching gum arabic, a flavouring and thickening agent, and later proteins in mung beans.
She went on to gain a doctorate at Manchester University and after the birth of her children Albert  and Susana, now aged 17 and 10, she began teaching science, most recently at Ruabon High School.
“I was covering maternity leave at Ruabon, teaching maths and biology and when that ended last summer I considered going back into pure research. However, I realised that as I hadn’t been involved in that for a long time, and hadn’t published papers,  it would be difficult
“My family and friends have always been very complimentary about my cooking and said I should do it professionally. There is a growing interest in Spanish food, with more and more tapas restaurants opening.
“When I was growing up in north west Spain my grandmother Teresa ran a restaurant in Salamanca called Roma. All the family worked in it – my uncles and my mother, so after school I would go along to help out. I remember the dishes she made, they were wonderful. After my great-grandmother died I lived with my gran for a while, so she wouldn’t be alone, and I learned more from her about cooking.
“I still have family in Spain and they often send me ingredients, such as olives from the local villages, and spices and herbs. That’s how I get the authentic taste of Spain in my dishes.
“After getting lots of advice I decided to start my own business making Spanish food to sell at farmers’ markets. However, I wasn’t sure what to call the new company. Then, one day when I was making strawberry jam at home my favourite song came up on my iPhone playlist – Sabor de Amor. It’s all about the taste of strawberries and home, and I thought it would be ideal.
“As I am a scientist at heart I made sure my kitchen at home met all the high standards needed to get the licences to create food at home to sell.
“One of the most popular things I’ve been making is a paella sauce: it’s a real concentrated stock with authentic flavourings in a bottle, so you just have to add it to rice and meat, or other ingredients,  to create the perfect dish. It really does taste like the one my grandmother used to make.
“I also make chanfaina, which is a regional dish from Salamanca that uses cheaper cuts such as offal, plus tapenades, which seem to be very popular with shoppers at farmers’ markets, like the monthly one at the Grosvenor Centre in Pulford.
A quartet of Wales’s best chefs will have a starring role at the festival. Graham Tinsley, executive chef at Carden Park in Cheshire and Conwy’s Castle Hotel, will be cooking up a Welsh feast with Mike Evans, hospitality lecturer at Coleg Llandrillo, Rhos on Sea, and Dion Jones, one of Europe’s finest young chefs.
The ever popular Dai Chef, now the resident chef at Bodnant Welsh Food, the centre of excellence for Welsh food in the Conwy Valley will be there too.
Robert Didier, a baker who trained with culinary legend Raymond Blanc will also unveil the UK’s most expensive loaf – made with champagne and 24 carat gold, at the event.
Cadwyn Clwyd’s Agri Food Officer, Robert Price, believes this year’s festival is going to be one of the best ever.
He said: “Thanks to a whole host of indigenous companies like Orchard Pigs, North East Wales is rapidly establishing a reputation as a centre of excellence for high quality cuisine.
“The food festival is a perfect shop window for the companies who form the backbone of our rural economy.
“The location of the Pavilion is absolutely spectacular – I can’t imagine that any other food festival in the UK has a more beautiful setting.”
For more information about Hamper Llangollen 2014 visit www.llangollenfoodfestival.com
Posted by llanblogger at 7:34 AM