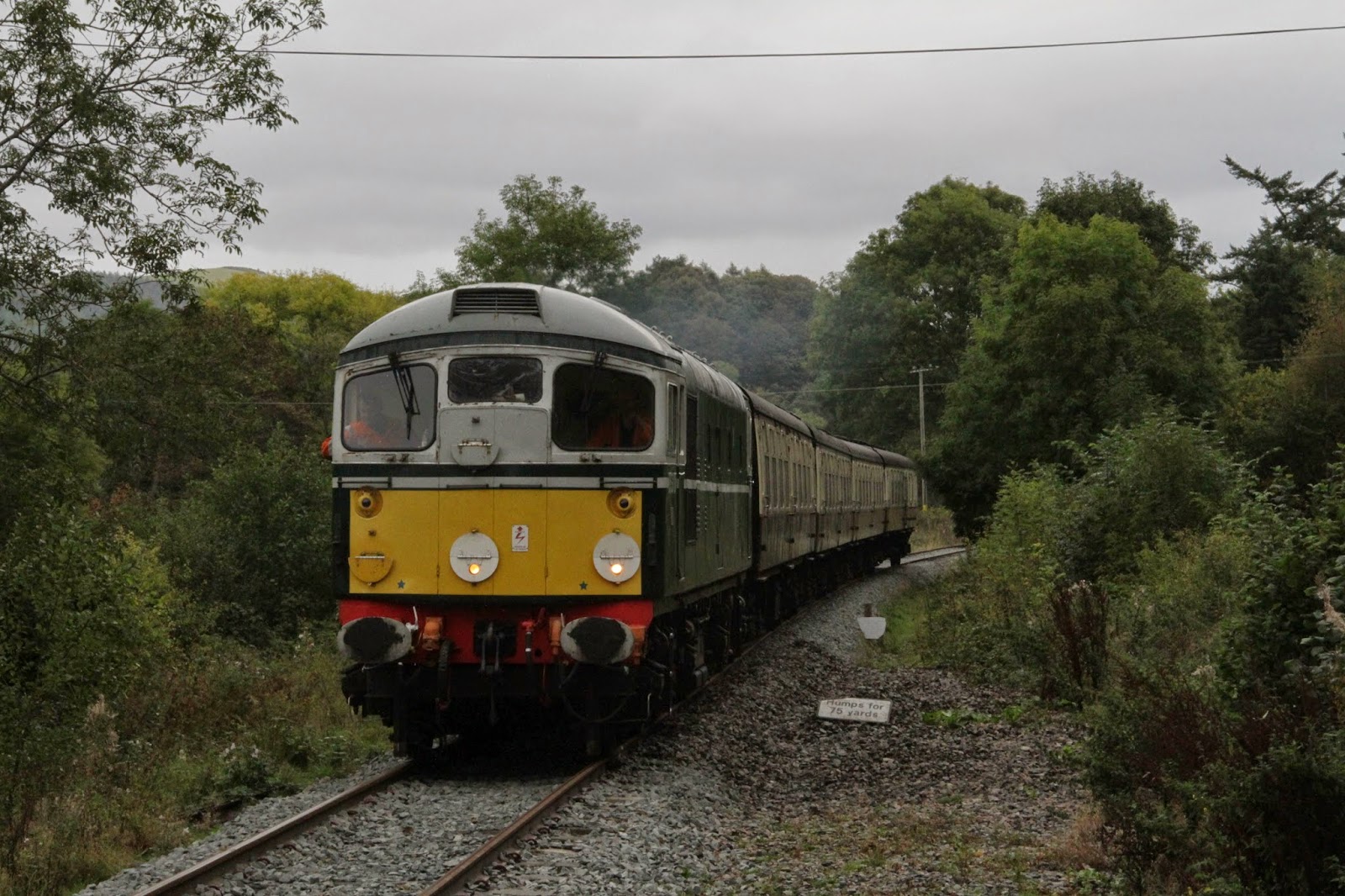 * A test train on the new line at Bonwm Gates, near the bends on the A5,
with a Class 26 locomotive pulling a set of coaches.

Trains will run again between Llangollen and Corwen later this month for the first time in almost half a century.


Llangollen Railway has just announced that the fulfilment of its £1 million dream to re-open the line between the two Dee Valley towns will come on Wednesday, October 22 when special commemorative passenger trains take to the rails.


The extension will be formally declared open on St David’s Day, March 1, next year.


The original line was axed and Corwen station shut in 1965 as part of the Beeching plan with the rails being taken up three years later.


But Llangollen Railway volunteers began work on a two-mile (3.2km) extension to reopen the severed link in 2011.
The scheme includes a temporary platform at the Corwen end of the line.


Following a recent track inspection, the railway’s general manager Kevin Gooding made an historic announcement which says: “The track inspection was successfully completed, with requirements for specific items to receive attention, to allow for the extension to Corwen to open for public services with effect from October 22.”


On that day special trains will run along the re-opened line carrying passengers who have made a contribution to the project, and Mr Gooding added that he will shortly be contacting those qualifying for a seat by post with details of the ticketing arrangements.


Unallocated tickets will subsequently be on offer to the general public at a premium fare.


A new public service to Corwen will operate during half term week from Monday, October 27 and at weekends until the end of the season on November 9.


As a pre-event option during the Railcars 60 weekend, this weekend October 4/5, trains will be extended to Colomendy Curve, short of the Corwen station site.


During September contractors put up the 330ft wooden decking platform at Corwen, which pedestrians can access on a graded ramp.


The approach to the ramp from the town car park is through the trees by the area of the Flood Alleviation Scheme’s water catchment installation where a portable building is now installed thanks to grant aid from the Area of Outstanding Natural Beauty (AONB).


Painted externally in chocolate and cream, the interior is being fitted out to provide AONB information about the Dee Valley and offer facilities for station staff.


A formal all-weather path through to the station site is due to be installed by the Countryside Services of Denbighshire County Council.


George Jones, for Llangollen Railway, said: “We have made tremendous progress this summer and trains will operate to Corwen in the tail end of the 2014 season.


“This short period of train services will provide experience in operating the extension prior to the formal opening on March 1, 2015 and a full season of trains linking Llangollen with Corwen during 2015.”


He added: “The point has to be made that the extension is now an active railway and trains may come at any time west of Carrog.”
Posted by llanblogger at 11:06 AM