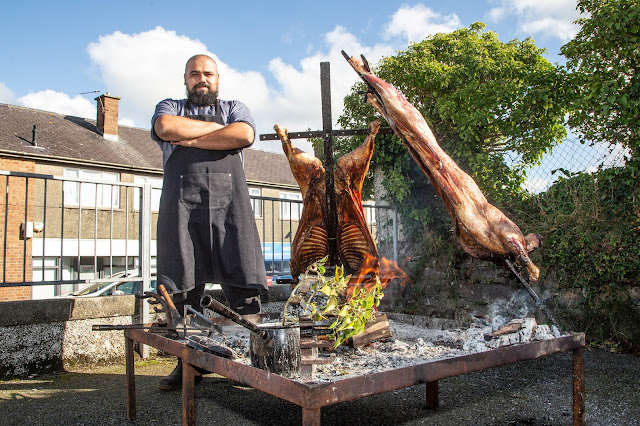 * Hot stuff: Chris Roberts will give an outdoor cookery demonstration at the food festival.

A larger than life TV chef will be championing Welsh beef and lamb with an outdoor cookery demonstration at a top food festival.

Chris “Foodgasm” Roberts, who has his own television series on S4C, will also have a starring role at the popular Llangollen Food Festival on Saturday and Sunday, October 19 and 20.

He went from being a man who cooked on an old-fashioned spit roasting fire with his friends, without anyone watching, to overnight fame as a Facebook foodie with thousands of fans.

The first TV series, Bwyd Epic Chris, produced by Caernarfon-based Cwmni Da, was a big hit on S4C and the second series will be going on air in November.

Chris, who lives in Caernarfon, is looking forward to his first visit to the festival which has now established itself as one of the highlights in the culinary calendar and has been named as one of the Top 10 food festivals in the UK.

According to Chris, the inspiration for his cooking style has come from Patagonia, the Welsh colony in Argentina.

He said: “My dad went to Patagonia and told me how they cooked. I never really thought about it at first but a couple of years ago I thought I’d give it a try and cook the Gaucho way. Gauchos are basically cowboys.

“It just took off really and people just seemed to like what I was doing. I was asked to do a TV series for S4C and we are just filming the second series.

Chris added: &quot: "There is always variation when cooking on an open-fire, instinct needs
to be used when adapting to the climate outdoors.

“You must feel the food, the heat, test the temperature and be patient. When the food’s ready, it’s ready. I’m not just putting food in the oven and waiting for three hours, I work with the elements and the experience is always different.

“I want to show that we have amazing local produce, to showcase and celebrate the local food. Food is the best way of bringing people together, it makes life worth living and makes everyone feel good.”

“I’ll almost certainly cook up some Tomahawk Welsh Black steaks in Llangollen as well as some lamb. We have the best meat in the world in Wales. It comes from animals that have had a good life. A happy lamb is a tasty lamb in my humble opinion.

“Welsh lamb that has been out on the hillsides eating succulent grass, berries and herbs and that comes through in the flavour of the meat. It’s the same with grass fed Welsh beef.

“And if you buy Welsh meat that has the PGI mark - Protected Geographic Indicator – then it’s fully traceable right down to the farm and the animal it originated from. That’s important.”

“I’m looking forward to Llangollen and showing people what an amazing product we have in Welsh meat and how to cook it Gaucho-style. I can assure meat lovers they won’t taste anything better!”
Llangollen Food Festival committee member Phil Davies says the festival is the perfect platform for Chris Roberts to demonstrate his love of Gaucho-style cooking.

He said: “The idea of the food festival is to inspire people to try new products, and see what we have to offer here in Wales.

“Chris’ Facebook videos have been viewed an incredible number of times and his first TV series was so popular we thought he’d be the perfect fit for the Llangollen Food Festival.

“We are delighted he’s agreed to come along and demonstrate his amazing cooking. There is no doubt that Welsh meat, be it lamb or beef, is a really high quality product and deserves to be championed.

“Cooking meat the way people of Welsh heritage learned to cook when they arrived in Patagonia just makes it extra special.”

* For more information about the Llangollen International Food Festival, visit www.llangollenfoodfestival.com
Posted by llanblogger at 6:51 AM