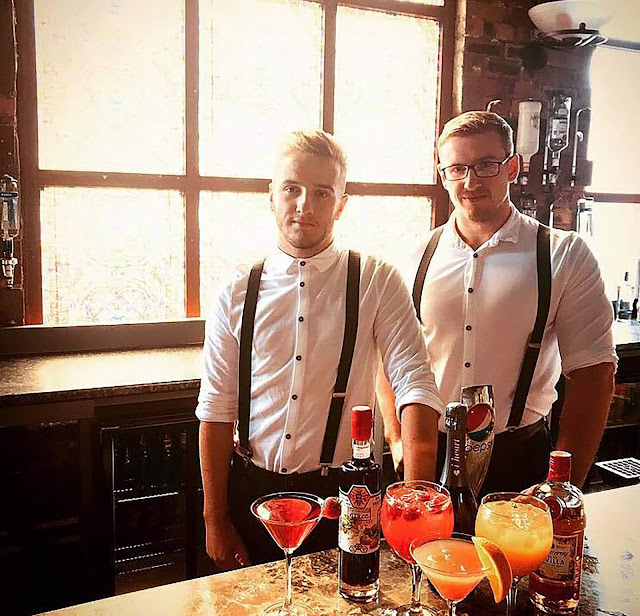 
A new cocktail is being launched in honour of two aristocratic women who scandalised 18th century society when they eloped together from Ireland and settled in Llangollen.

The concoction called Ladies’ Dee-light that’s being unveiled at the town’s popular food festival will celebrate the lives of the Ladies of Llangollen, Lady Eleanor Butler and Sarah Ponsonby.

The new drink is the brainchild of two brothers whose micro bar business is taking North Wales by storm.

They have just toasted the launch of their own product range and will be raising a glass to Llangollen Food Festival  later this year with the cocktail that’s people will be able try for the first time at the festival that being held on Saturday and Sunday, October 19 and 20.

The event has now established itself as one of the highlights in the culinary calendar and has been named as one of the Top 10 food festivals in the UK.

It’s being held at the Llangollen Pavilion, less than a mile from the house, Plas Newydd, where Lady Eleanor Butler and Sarah Ponsonby lived.

They were regarded as eccentric characters and the exact nature of their close relationship remains a talking point to this day.

As well as working on their house and garden, the ladies spent their time in reading, studying foreign languages and corresponding with a wide variety of people.

Many of these were well-known figures of the day and they often came to visit the ladies.
Among them were the likes Wordsworth, the Duke of Wellington, Lord Byron, Sir Walter Scott and Anne Lister who was inspired to go home and informally marry her own lover as a result.

The series was based on Lister’s collected diaries which contain over four million words and are written largely in secret code, documenting a lifetime of lesbian relationships.
Former personal trainer Gruff, 26, from Wrexham, said: “When we started out, the Llangollen Food Festival was one of those events in the calendar we really wanted to attend and we just kept our fingers crossed that everything would go well and we’d get there.

“We’ve been there plenty of times as visitors but this is completely different. We’re really excited to show off our skills and bring along our bespoke cocktail bar.

“To help mark our first anniversary and our first visit to Llangollen Food Festival as a business we wanted to do something really special, and the Ladies’ Dee-light will celebrate the legendary Ladies of Llangollen and another local icon, the River Dee and the town centre Dee Bridge which is one of the Seven Wonders of Wales.

“Although nobody knows for certain whether their relationship was a sexual one, the Ladies of Llangollen are revered today as icons for the LGBT+ community.

“We will be keeping the recipe secret until the new cocktail is launched at the food festival but we  are keeping our fingers crossed it will be a hit.”

Gruff and former bartender Ieuan, 21, who run the Bargain Booze Plus Rhosddu store in Wrexham, had no intention of launching their own business a year ago.

Last summer, they were asked if they could share their gin knowledge and expertise at the Garden Village Fete in Wrexham. They bought a gazebo from Argos and set up a makeshift bar with a range of specialist gins – and it went down a treat.

“Obviously gin is very popular at the moment. We bought a little gazebo from Argos and put together a variety of gins and it was extremely busy!” said Gruff, a former Ysgol Morgan Llwyd pupil.

“From there, we started receiving emails from festival organisers and local people in the area asking us whether we could set up the same stand at their event or in their back garden.”

Such was the demand they established Booze Brothers, a name which communicates their shared love of good drink, and invested everything they made in the first year into a brand new triple horsebox which they professionally converted into a bespoke cocktail bar.

They also took themselves off to London and completed a course in Mixology at the London European Bartender School to learn more about the art of cocktail making.

“We absolutely never expected this success. We never even intended it to become a fully-fledged business,” explained Gruff, who grew up in Rhosllanerchrugog.

“It’s really a case of word-of-mouth momentum. We’ve really tried to nail down the quality of what we do and work hard perfecting the cocktails.

“A lot of bars provide a great offering when it comes to gin and also cask ales. When it comes to cocktail bars, often they’re stuck in the mould of what’s available already. What makes us different and professional is the fact we’ve moved towards customised cocktails.”

Although cocktails are the mainstay of their business, the bar carries a wide gin offering as well as plenty of other spirits including rums, whiskey and vodkas. However, the duo’s own Angel Delight Margarita and Raspberry Ripple Daiquiri cocktails have been so popular, they’ve now branched into product development with the launch of six tinned cocktails which will be available at events and local bars, restaurants, hotels and pubs in the near future.

“We’ve worked very hard to formulate these into bar standard cocktails,” said Gruff.
“We’ve not skipped on the alcohol content. When you’re buying from a supermarket, ready-made cocktails are all around 5% alcohol volume. Ours are around 14%.

“We’re now looking to push them out further in bars, hotels, restaurants and hotel chains locally and develop the branding.

“It’s all about the quality.”
Posted by llanblogger at 6:41 AM