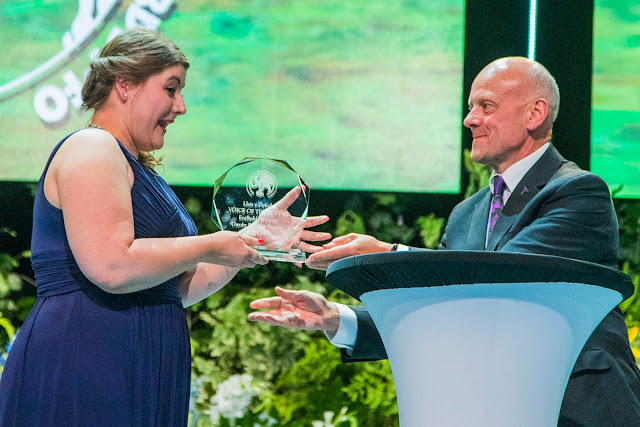 * Voice of the Future 2017 winner Sian Dicker is presented with the Pendine Trophy by Mario Kreft.

A global search to find a new international singing star has attracted a record number of entries.

The prestigious Pendine International Voice of the Future competition will be one of the highlights of the week-long Llangollen International Musical Eisteddfod which gets underway on Tuesday, July 3.

The aim of the annual competition which started in 2013 is to advance the careers of the world’s most gifted young singers.

Each year the beautiful town of Llangollen in the Dee Valley, North Wales, welcomes talented International Voice of the Future entrants for the first two days of the festival, as competitors battle for the coveted Pendine Trophy through the preliminary rounds and the grand final on Wednesday, July 4.

For the second year running arts-loving care organisation Pendine Park, a long-standing supporter of the festival, are contributing £5,000 to the prize fund via the Pendine Arts and Community Trust which was established to support cultural and community initiatives.

The rest of the £10,000 prize pot is being donated by the Sir Bryn Terfel Foundation and Llangollen Eisteddfod.

The aim of the competition is to showcase and nurture young talent by raising their profile and giving their budding careers a financial boost.

Winners are also given the opportunity to perform in future Eisteddfod concerts with established international stars.

Previous winners include Meinir Wyn Roberts, who was a special guest at last year’s 70th anniversary opening concert, Elsa Roux Chamoux and Eirlys Myfanwy Davies, who performed with Sir Bryn Terfel and the world-renowned Maltese tenor Joseph Calleja at the festival in 2016.

The Pendine International Voice of the Future competition is open to singers over 19 and under the age of 28, with entries closing in early March annually.

The competition, now in its fifth year, has attracted a record number of 43 entries as its popularity continues to grow.

Pendine Park proprietor Mario Kreft MBE said: “We established the Pendine Arts and Community Trust to enhance our ongoing support to more than 20 arts organisations and a host of good causes in the community.

“We’re therefore proud to be working with the Sir Bryn Terfel Foundation to support such an exceptional competition which provides a catalyst for talented young individuals to reach new heights by launching their singing careers on a global stage.

“Music and the arts provide the golden thread that runs through everything we do at Pendine Park to enrich the lives of our residents and staff alike, so we’re delighted to be helping out by creating opportunities for gifted young singers by providing an international platform for their talent.”

Music Director at the International Eisteddfod, Vicky Yannoula, commented: “In my debut year as Music Director, I’m relishing the chance to discover the brightest young talent in association with Pendine Park and of course Sir Bryn Terfel’s Foundation.

“I’m looking forward to sharing the stage - as I join forces with the distinguished pianist, Peter Jablonski - to perform alongside our remarkable finalists in our Classical Collection evening concert on Wednesday 4th July.

“From its introduction in 2013, the calibre of competition and prestige has continued to grow. We cannot wait to experience the extraordinary level of excellence this year’s participants are sure to offer.”
Posted by llanblogger at 6:55 AM