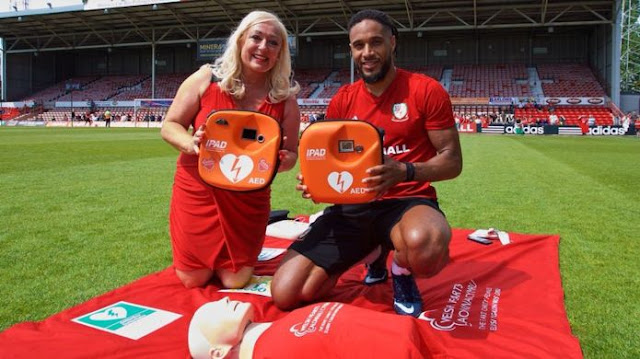 Llangollen Football Club is one of six across Wales where defibrillators have just been installed.

And there are plans to fund others in a bid to minimise deaths from sudden cardiac arrest.

The first six machines have been funded by Wales football players who donated their match fees for their friendly against Mexico in Los Angeles on May 29.
Ground staff will be trained to use the devices under the scheme, which aims to have them at all clubs in the country.

Llangollen Football Club was the first to receive its defibrillator on Monday.

A defibrillator is an automatic device that can be used to shock the heart back into a normal rhythm during cardiac arrest.


Performing CPR and using a defibrillator until an ambulance arrives, can help double a victim's chance of survival.

The partnership between the Football Association of Wales (FAW) and heart charity Welsh Hearts has found few of the hundreds of football grounds across Wales had one.

Its scheme aims to change that by fundraising to ensure every player and spectator at every club in Wales has access to one.

The FAW's medical services manager and lead physiotherapist, Sean Connelly, said: "With this partnership we will work together to fundraise to aid Welsh Hearts with the amazing work they do for heart health in Wales.

"Together we hope that this equipment will minimise the terrible instances from sudden cardiac arrests that have occurred in football grounds across Wales."

Welsh Hearts director Sharon Owen said: "We believe the impact on lives will be far-reaching, as no one should die in Wales due to a lack of a public access defibrillator in the event of an emergency.

"They should be available everywhere. I am excited to work with the FAW as they are at the heart of communities in Wales."
Posted by llanblogger at 6:44 AM