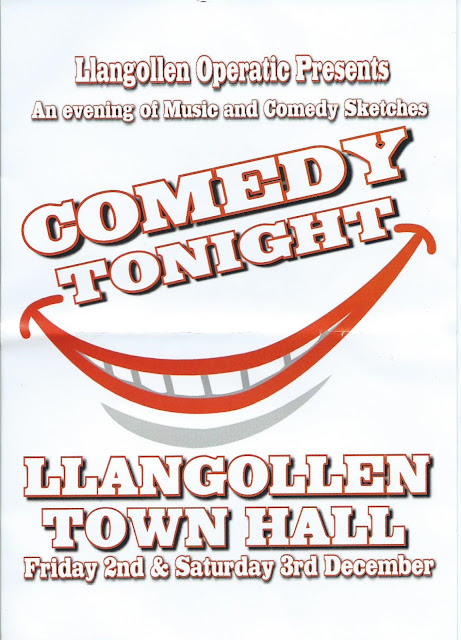 A talented cast from Llangollen Operatic Society polished up a whole stockingful of comic gems to present a delighted audience with a glittering pre-Christmas present at the Town Hall last night (Friday).


Their seasonal offering, entitled Comedy Tonight, does exactly what it says on the tin, serving up a varied selection of excerpts from some of the most hilarious TV shows of the past interspersed with stand-alone sketches and songs.
This feast of fun has everything – from a couple of hilarious helpings of ‘All Allo featuring that naughty hidden sausage routine and an acrobatic French Resistance girl to a rip-snorting recreation of the late great Victoria Wood’s legendary ditty of marital frustration, Can’t Do It.


Shining in both ‘Allo Allo tributes is Operatic stalwart Bill Cheshire who has just the right mixture of bashfulness and bawd to bring the wartime bar owner Rene startlingly back to life, and in the first knock-about snatch from the show he’s aided and abetted by a gendarme who’s so good he could really be French (actually, Nico Decourt genuinely is).
Bill’s back as a French landlord from a different era when he takes centre stage in Master of the House from Les Mis.


The superb chorus backing him and the setting – especially Bill’s fabulous Napoleonic military costume – makes the whole roistering experience a real highlight of the show.
But then there are many more, including Chris Sims’s gob-smackingly good portrayal of Victoria’s Wood’s Can’t Do It with its cheeky cascading lyrics and the re-visiting of the unforgettable Two Soups sketch which in the original saw doddering waitress  Julie Walter making real a hash of serving a couple of hapless diners.


Here Robin Crowley – who also directs the whole show – brings his own touch of hilarity to the piece.
Llangollen's neighbouring Twenty Club recently had a smash-hit run with another TV comedy icon, The Vicar of Dibley, with Louise Cielecki in the title role.

So with Louise being link woman for the night it would have been a sin for her not to revisit the crazy Gloucestershire parish in company with that man Chris Sims again and the marvellous Carys Stallard all of whom ensure that its sparkles anew.

Louise also works with her old sparring partner from their days in the society’s Young ‘Uns junior section, Nathan Lloyd, to present some delicious slapstick moments.

Talking about the Young ‘Uns, a group of them kick off the evening with a selection of numbers from their forthcoming production of Bugsy Malone led by its two stars, Cassius Hackforth and Celyn Orton Jones.

Helen Belton is the show's one-woman orchestra and it's amazing the musical power she can produce from just an electric piano.


The whole entertainment experience is the brainchild of Tracey Rawlinson and she deserves a round of applause as loud and strong as the production won from the audience at the end of a couple of hours of rib-tickling fun on its first of two nights.
If you want to get the Christmas snowball rolling in fine style why not see if you can grab yourself a couple of tickets for tonight’s closing performance as I believe there might still be a few left.


They’re £8 (£6 concessions) and you could try the usual outlets of Gwyn Davies butchers, Jades Hair and Beauty or Baileys.
Posted by llanblogger at 8:02 AM