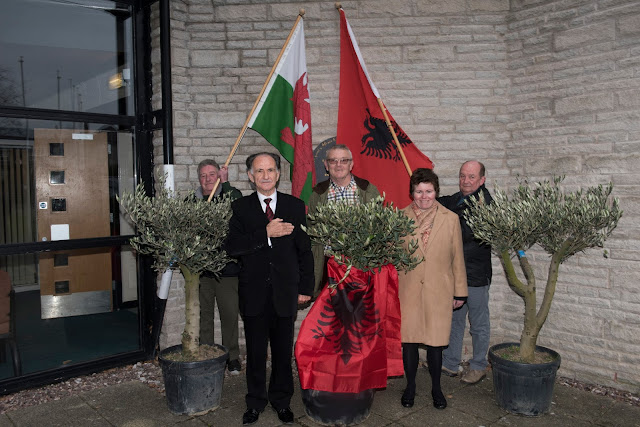 Llangollen Eisteddfod leaders welcomed a group of VIP visitors from Albania on Friday.


Visaret E Gores, a group of dancers and musicians from the country competed at this year’s festival.


The group stayed at homes in Overton where they were warmly welcomed by local residents and became firm favourites with everyone they met.


The dancers gave impromptu performances on the field when passers-by were encouraged to join in with their colourful routines.


Since then, Mr Mimani has been back to Llangollen to investigate how additional groups from Albania can take part in the Eisteddfod.


He is now planning to return once more, with five Albanian dancers and musicians from a group called Qypryllinjte E Roshnikut.


A groups from Albania visited Llangollen last week and after lunch in the Corn Mill there was a short ceremony during which gifts were exchanged and Mr Mimani presented the Eisteddfod with three established olive trees which will be planted on the Pavilion field next spring.


Among those attending the ceremony was Clwyd South MP Susan Elan Jones, Eisteddfod’s competitions officer Merle Hunt and festival volunteers.
Posted by llanblogger at 6:39 AM