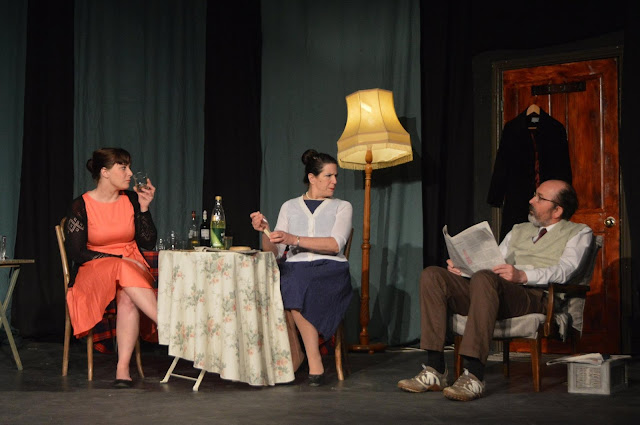 * A scene from The Entertainer featuring, from left, Victoria White, Roberta Bailey and Grahame Smith.

Washed-up music hall comic Archie Rice shows no emotion as he trots through his dated and pathetic routines in front of his bored audience.


And he brings exactly the same non-emotions to bear as he deals with his dysfunctional family.
The character, which has become an icon of the British stage, and his bickering relatives are brought faithfully and believably to life - although there’s precious little of that left in Archie – by a very useful cast as Llangollen’s Twenty Club amateur players staged The Entertainer, John Osbourne’s legendary drama, at the Town Hall over three nights last week.


Archie is hanging precariously to the increasingly bedraggled coattails of old-fashioned music hall as its world is shattered by the advent of television in the mid-1950s.
There’s not a trace of joy in him as he goes through his down-at-heel comedy routines for an audience which wants to be there even less than he does.


He’s grown this hard emotionless shell over many years, developing the motto which he brings out in one of his little songs which has the lines, “If they see you’re blue they’ll look down on you, why should I bother to care?”
Back home there’s his old dad, himself a retired musical hall turn, his alcoholic wife and a son who preferred a spell in jail to doing his National Service and being shot at on some foreign field.


Catalyst for tipping the delicate balance which exists between them is an unexpected visit by Archie’s daughter who has just broken up with her boyfriend.
Archie, a role once occupied on film by Laurence Olivier, was played with panache by Twenty Club stalwart David Edgar employing just the right measure of deadpan comedy and pathos. He also took a prodigious amount of lines easily in his long stride.


His drunken wife Pheobe was neatly portrayed with both sympathy and emotion by Roberta Bailey who is a newcomer to the group.
And although it was only his second time on stage for the club, Grahame Smith very competently handled the role of Billy Rice, Archie’s father.


Another club second-timer, Victoria White, gave a very polished performance as Archie’s granddaughter Victoria and Dan Pedley, who has had three previous roles for the group, was right for the role of Archie’s son, Frank.
The Entertainer’s other son, Mick, we don’t meet but merely see the family mourning after word comes through that he’s been killed in action as he faithfully serves his country in the army which his brother had side-stepped.


This development at least stirs something in Archie but not for too long as he’s soon back on stage doing his patter again.
But as he strides off into the dark at the end of his act we could be left wondering if this is the final curtain for him. Or, actually, like The Entertainer himself, could we really give a damn?


This was a nice piece of work by Barry Cook, taking his first stint as director after many appearances on stage for the club, ably assisted as usual by a small army of backstage volunteers.

A neat touch towards the end was bringing on powerful gospel singer Sandra Butterworth to join in with the farewell to father Billy who dies near the end of the piece. That, unlike Archie, was full of emotion.
Posted by llanblogger at 11:24 AM