Phil to share recipe of success with business leaders 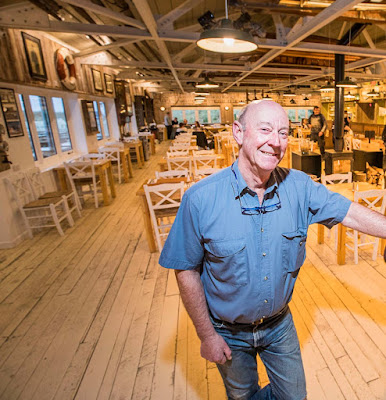 North Wales is perfectly placed to play a key role in any drive for Britain to produce more of its own food.

This will be the main message a pioneering food entrepreneur from Llangollen will have for members of an influential business group tomorrow (Thursday).

Phil Brown (pictured) is a former schoolmate of Prince Charles who went on to create the nationwide Philpotts chain of sandwich shops with an annual turnover of £7.5 million and struck gold again by opening a hit seaside café on Anglesey. He will be sharing his recipe for success as one of the keynote speakers at the next meeting of Wrexham Business Professionals (WBP) at the town's Ramada Plaza Hotel.


The group is made up of successful businesses and highly skilled professional firms of solicitors, accountants and other business professionals working together to raise the profile of enterprise and expertise that exists in the region and beyond.

The topic for discussion at their latest meeting will be Powering Regional Prosperity – Taxing Times.

Also addressing the theme will be the other speakers, Professor Mark Drakeford, the Welsh Government’s Cabinet Secretary for Finance and Local Government, and Rachel Clacher, co-founder of Wrexham-based telephone answering giant, Moneypenny.

Phil Brown, who is originally from Neston on the Wirral and attended the famous Gordonstoun School in Scotland at the same time as the Prince of Wales, began his career as a junior reporter on the Birkenhead News in the late 1960s and went on to start a string of cutting edge businesses, including the first mobile disco in Sydney, Australia.

Back home 67-year-old Phil, who has lived in a Victorian water mill in the Vale of Llangollen for the past 32 years, went on to found the Philpotts bespoke sandwich empire.

After opening his first shop in Chester in 1985 he added fresh outlets right across the UK and likes to be remembered for being the inventor of the coronation chicken sandwich.

He sold his interest in the chain in 2006 and only retains the Shrewsbury shop which he rescued from impending closure by buying it back for just £1.

In the late 1990s he saved an historic but derelict water mill on the banks of River Dee in Llangollen – earning himself the nickname of “Phil the Mill” and leased it on to the group which then turned it into the highly successful Cornmill restaurant.

His own venture into the restaurant business came last July when he created 55 new jobs by ploughing more than £1.5m into launching the Sea Shanty Café in Trearddur Bay, Anglesey, "confounding sceptics who said it wouldn't work".

Phil said: “I’m looking forward to speaking to Wrexham Business Professionals and will tell them a little about my life.

“Based on my own experiences in the food business, one of the main messages I’ll have for them is I see no reason why Britain can’t produce much more of her own food.

“We currently produce so many things, like honey, meat, and our own fantastic cheeses. One of the few things we can't do in our climate is to grow tropical fruit.

“It's clear to me North Wales could play an important role in helping Britain to produce more of her own food.”

Phil’s new Sea Shanty Café on Lon St Ffraid, which he runs with his business partner Neil Gitton, celebrates beaches, holidays and the village’s links with sailing and local history.

The nautically-themed bistro, just a stone’s throw from the beach, stands on the spot - and bears the name - of an old wooden café that was once a much loved haunt of holidaymakers for decades.

The new café’s ceiling is hung with historic sailing boats, while the walls are decorated with sand and shells collected from beaches around the world plus other sailing memorabilia and curiosities.

On the back of rave reviews from foodies, families and tourists the café recently added to its 50-strong team by taking on an extra three chefs and five front-of-house staff.

But Phil says that just as with everything else he’s done in business the Sea Shanty didn’t happen overnight.

“All my past successes have been the result of careful consideration and observation,” he said.


Gill Kreft, the chair of Wrexham Business Professionals, said: "We're delighted that we have such a high-powered line-up for our next meeting.

She said: "Phil Brown's many business successes are an inspirational example of what can be achieved when you have a great idea and the drive and determination to see it through.

"I am sure Phil, Professor Drakeford and Rachel will have some fascinating insights to share with the audience who will be able to apply some of those lessons to make their own businesses even more successful."
Posted by llanblogger at 11:08 AM