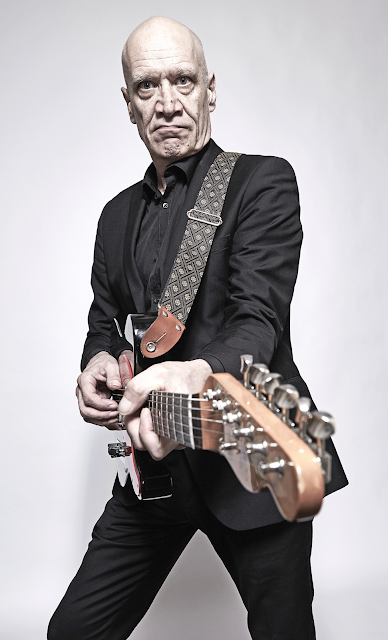 * Wilko Johnson (by Paul Crowther).
A disused factory could get all lit up to help illuminate this year’s 20th anniversary Llangollen Fringe.
Professor Alec Shipley, head of the School of Creative Arts and professor of Contemporary Art Practice at Wrexham Glyndŵr University, has a special project in mind to mark the landmark occasion which means using the old Berwyn Works on the A5 through Llangollen as the base for a spectacular light show.


Prof Shipley was a guest at last Friday’s official launch of the festival at the White Water Hotel and explained that he was currently thinking of ways to create a light show based on the derelict building as a way of celebrating the Fringe’s anniversary.
He said: “I see the building as a kind of lantern and I’m looking at how to light it in a certain way.”


The professor told a large audience he also had in mind marking 20 years of the Fringe by staging another light show outside the Town Hall in Castle Street.
“I like to work with people, light and space and I have an idea of asking people to donate old teacups and saucers which could be turned into some sort of light fitting outside the Town Hall, perhaps a chandelier,” he added.


Highlights of the festival programme, which runs from July 13-23, include appearances by:
* CC Smugglers, a Bedfordshire sextet inspired by American and world folk, swing, jazz and blues on Friday July 14


* Prolific activist, documentary maker and comedian Mark Thomas who will talk about his book 100 Acts of Minor Dissent on Sunday July 16.
* An evening in conversation with Guardian columnist, TV chef and austerity campaigner Jack Monroe on Tuesday July 18.


* The return to the Fringe of  singer, guitarist, songwriter and actor Wilko Johnson who is particularly associated with the pub rock/rhythm and blues band Dr Feelgood in the 1970s. He will appear at the Pavilion on Wednesday July 19.
* Singer, songwriter, and multi-instrumentalist Seth Lakeman on Thursday July 20.


* The anniversary finale concert comes when folk group 9Bach present an audio visual spectacular at Valle Crucis Abbey on Sunday July 23.
Apart from the concerts a Soul Train will run on Llangollen Railway and a Fringe jazz boat will set sail along the Llangollen Canal.


Also planned are drama in town pubs, a storytelling café,  a performance by local dramatist Peter Read, famous for his portrayal of Dylan Thomas, and an art competition based at Plas Newydd echoing the Fringe 2017 theme of Legends.
Llangollen’s New Dot community cinema group has teamed up with the Fringe for a special screening of the 80s film Sing Street on Thursday July 13.


For a limited period only Earlybird festival tickets are on sale, offering £160-£180 worth of concert admissions for £70.
* For more Fringe information and tickets, go to: http://www.llangollenfringe.co.uk
Posted by llanblogger at 6:41 AM