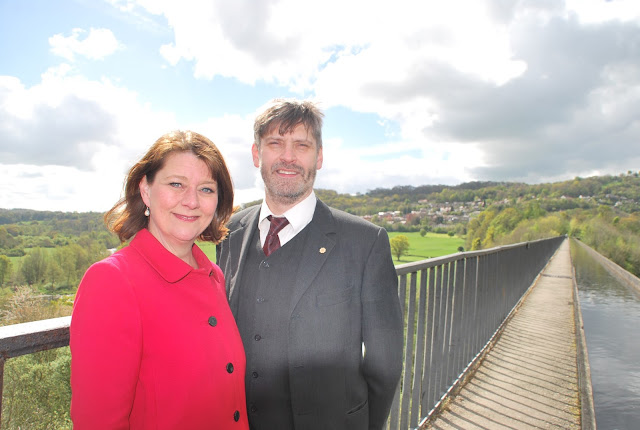 Plaid Cymru have selected an engineer from Trevor to be their candidate for Clwyd South in the general election on June 8.

Father of two Chris Allen was born in Nuneaton, Warwickshire, and works at Mail Solutions in Llangollen.

His wife, Rachel, is a teacher at Ysgol Dinas Bran, and her family live in Chirk.

Mr Allen said: “This election is an opportunity for the people of this area to say that it’s about time that their voice was heard. Wales has been ignored for far too long.

“My focus as your MP would be to ensure that Wales, and this part of Wales especially, is not ignored and gets the best possible deal out of the UK’s Brexit discussions with the EU.”

Mr Allen said that the fact that he was born in England and not Welsh speaking showed that Plaid Cymru was a party for everyone: “Some people tell me that they like Plaid Cymru but because they don’t speak Welsh they feel that they can’t support the party.

"I find that amusing because I’m from England and I’m not a Welsh speaker. But Wales is my home and I want the best for my community. The only party that puts the interests of our communities here first is Plaid Cymru – the Party of Wales. Plaid Cymru is for everyone who lives in Wales and I’m a perfect example of that.

“I came to live here 20 years ago and have worked for both Wrexham Council and run my own business. I can see how Wales is being ignored by the Government in London. We desperately need a strong voice to put the interests of Wales and its people first, not just tow the party line that’s only interested in London and the south-east of England.”

She said: “Chris is an engaging and warm person, who is committed to standing up for his community and Wales. We both know that Plaid Cymru is the only party that will fight for Wales and speak up for the Welsh national interest, for jobs and the economy. We desperately need an alternative to challenge the Tories, who would devastate our communities. I wish Chris all the best in the elections on June 8.”

Posted by llanblogger at 7:35 AM