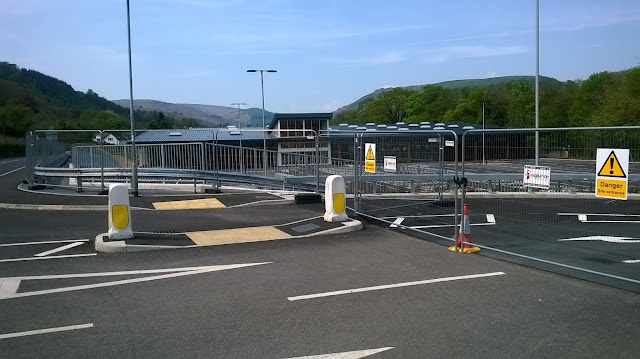 * The Berwyn Street supermarket for which a planning application has now been submitted.


The 34,000 sq ft unit off Berwyn Street has stood empty since May 2015 when Sainsbury’s for whom it was built made the shock announcement that they would not be moving in due to a scaling back of their stores.
The application, made in the name of Sainsbury’s who still own the building, seeks permission for the subdivision of the existing retail unit and alterations to allow it to trade as two retail units with associated internal and external physical alterations to the building, service yard, customer entrance and forecourt areas.


The move, which comes after more than a year of speculation about the eventual tenant, has been welcomed by Llangollen county councillor Stuart Davies who said: “Mention of Aldi and Home Bargains being the two prospective tenants of the supermarket is made in the covering letter of the planning application and also in a background document.
“I am happy that an application has finally been made for this empty building and to see that there are prospective tenants in mind.”

The Sainsbury’s pull-out, which they blamed on “adverse trading conditions” at the time, dashed hopes for 130 promised jobs.

Sainsburys announced they wouldn’t themselves be running the store directly and revealed they were looking for potential tenants.

Interest by Aldi and the discount group Home Bargains has often been speculated upon but never confirmed by either company.

A spokesman for Aldi told llanblogger a few months ago:  “Aldi, the award-winning discount food retailer, is keen to develop a new food store in Llangollen.

“There is a clear need for greater shopping choice in the area and Aldi is looking at a variety of sites that fit both suitability and convenience for local shoppers.”

And a spokesman for Home Bargains said at the time: “Unfortunately, it’s a no comment from us, as we work to a strict planner of confirmed stores.”

* The application, reference number 03/2016/0887, can be inspected in full via the planning search section of the Denbighshire County Council website at: http://planning.denbighshire.gov.uk
Posted by llanblogger at 6:44 PM