llanblogger notches up £200 from Memory Walk

llanblogger raised £200 to help in the battle against dementia when he strode out in the Alzheimers Society's first ever Memory Walk in Delamere Forest on Saturday morning.

Phil Robinson joined around 3,500 fellow trekkers in the big event, which was part of the current season of walks being held across Britain with the aim of raising £6.4 million to help finance research into the distressing condition which affects 225,000 people in the UK each year.

Phil chose to walk the route around the lake in memory of two close members of his family who suffered from dementia.

He said: "It was a fantastic day which saw upwards of 3,500 people gathering on the car park at Delamere to take part in the first Memory Walk to be held there.

"There was a real carnival atmosphere, with a Zumba warm-up session before we all headed off into the forest, where we found a drum band in a clearing who were helping to set the pace for us.

"On the walk it was amazing to see the little cards attached to people's official teeshirts describing who they were remembering as they marched on - parents, grandparents and spouses.

"There were people of all ages, from tiny tots to more mature walkers and, as they went along they were sharing their stories about why they had decided to get involved. 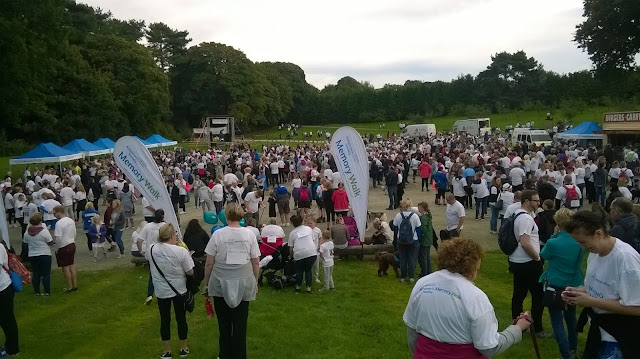 * Thousands of people gather before the start of the Memory Walk.

"Almost as numerous as the human trekkers were the dogs people had brought along with them - some proudly wearing their Memory Walk teeshirts or Alzheimers Society scarves."

He added: "The whole thing was brilliantly organised with walk marshalls dotted along the route to make sure everyone was ok and didn't get themselves lost.

"I understand that the current season of walks will involve around 100,000 across Britain, and if they have as much fun as I did it's something they'll never forget. 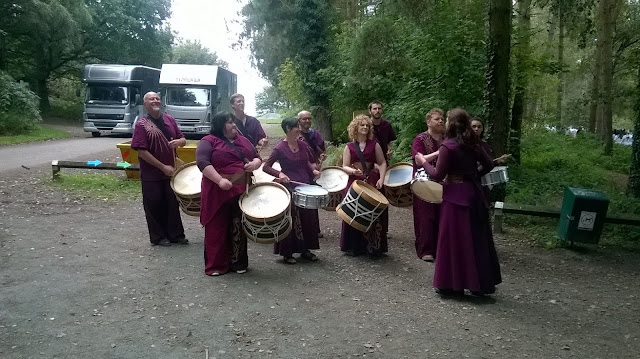 * A drum band helps set the pace for walkers.

"I'd like to thank everyone who sponsored me, enabling me to comfortably hit and then better my fundraising target of £150 to make £200 for this extremely worthwhile cause."

* See Phil's Justgiving page at: https://www.justgiving.com/fundraising/Philip-Robinson8
Posted by llanblogger at 6:39 AM