Llan could be part of proposed new constituency 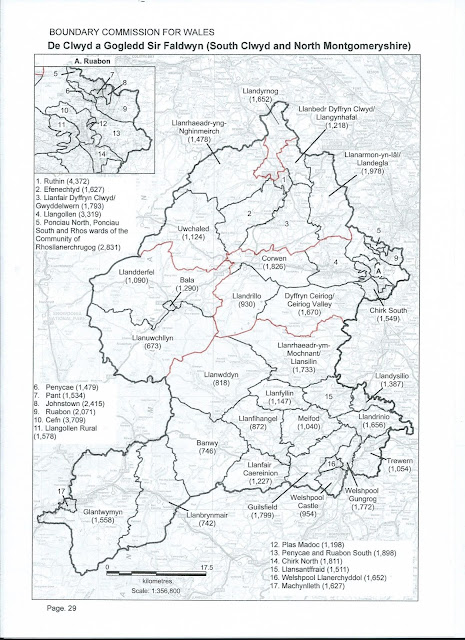 * The proposed new constituency of South Clwyd and
North Montgomeryshire, with Llangollen
included in area four on the map.
Latest proposals from the Boundary Commission for Wales for changes to the country’s electoral map show that Llangollen could form part of a suggested new constituency called De Clwyd a Gogledd Sir Faldwyn (South Clwyd and North Montgomeryshire).


Also included in the new constituency would be parts of the existing Clwyd West and Dwyfor Meirionnydd, Montgomeryshire and Vale of Clwyd seats.


The proposed constituency would have 71,097 electors which is 4.9% below the UKEQ of 74,769 electors per constituency.


The Boundary Commission says: “The remaining electoral wards from the existing constituencies of Clwyd South, Clwyd West and the Vale of Clwyd were considered appropriate to combine in a constituency as they share similar rural, economic and social characteristics.


“However, there is an insufficient electorate in these areas to form a constituency.  There is therefore a need to extend the proposal south encompassing the northern wards of the existing Montgomeryshire constituency.


“Wards from the existing Dwyfor Meirionnydd constituency have also been included to enable sufficient road access to all parts of the proposed constituency.


“The Commission acknowledges that this is the most disruptive change to the existing arrangements of all the newly proposed constituencies.


“The proposed constituency is geographically large at 2,704 km2, reflecting the sparse population and rural nature of the area.”


“The Commission has decided on the name to reflect the areas within the proposed constituency.


“Having regard to the linguistic characteristics of the larger part of the area involved, the Commission has decided to give the proposal a Welsh language official name and an English language alternative name.”


* Full details can be found at http://bcomm-wales.gov.uk/2018-review/maps_and_supporting_information?lang=en


* Representations about the review should be addressed, within 12 weeks, to the Boundary Commission for Wales, Hastings House, Fitzalan Court, Cardiff, CF24 0BL, faxed to 02920 464820, or e-mailed to bcomm.wales@wales.gsi.gov.uk.
Posted by llanblogger at 6:35 AM