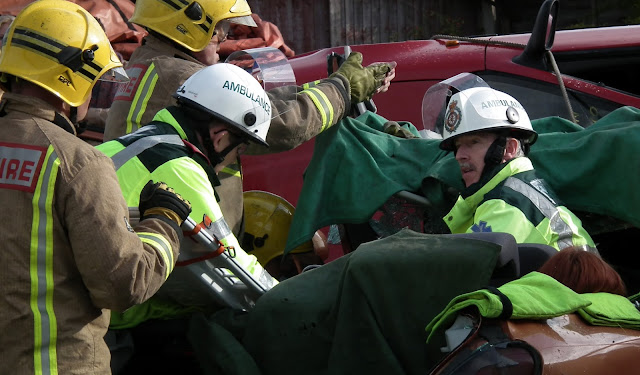 THE WELSH Ambulance Service is backing a European day of action to reduce the number of people killed in road accidents.

European road safety network TISPOL has launched a campaign in the hope that September 21 will be the first European Day Without A Road Death.

Project EDWARD calls on all road users to reflect on their behaviour and attitude in a bid to reduce the number of serious accidents.

Clinical Team Leader Dermot O’Leary has witnessed first-hand the impact that road traffic collisions (RTCs) have on patients, their families and members of the emergency services who attend them.

Last year 105 people were killed on the roads of Wales, while a further 1,081 were seriously injured.

Dermot said the emergence of technology and the use of devices such as mobile phones and sat navs has led to an increase in potential distractions for road users.

He added that drug driving was also on the rise, which can seriously impair a driver’s reactions.

Dermot said: “People don’t realise just how dangerous RTCs are. In a collision your weight increases between 30 and 60 times.

“Despite it being against the law you still see a lot of people driving with a phone in their hand and hands free is not really any better, as you can’t do two things at once.

“The unfortunate thing these days is we’re seeing a huge increase in so-called legal highs and the use of recreational drugs and people think that it’s okay to get behind the wheel.

“One thing I always say to people is if they could be in my shoes, crawl into a crashed car and look into the face of somebody and think ‘Am I going to be able to save you?’ then they might think drink or drug driving is an issue.”

Dermot, who is based in Rhyl, takes part in Deadly Impacts Roadshows along with other emergency service partners to teach college students about the dangers of the 'Fatal Five' - excessive speed, anti-social driving, no sea tbelts, drink or drug-driving and using a mobile phone whilst driving.

Dermot said: “Part of the problem you’ve got with the age group 15 to 24 is that road traffic death is the biggest killer.

“The kind of cars they drive in aren’t the latest ones with side impact protection and multiple airbags, they’re the older cars as it’s the first ones they can afford to drive.

“I cover what happens to their body in a collision and show them the sorts of injuries you can receive.

“We follow that up with a session whereby I’ll then show them the equipment I’ll use like tubes and cannulas.

“We put someone in a Kendrick Extrication Device so they can feel what it’s like to be extricated. It’s the closest thing to feeling it that we can give them.”

Dermot has pledged his support to Project EDWARD a nd is calling on people across Wales to take heed of the safety messages issued by the emergency services in order to prevent road deaths.

He said: “At the end of the day if you stick to speed limits, you wear your belt, you don’t drink drive, you don’t drug drive, you’re not fiddling with your mobile phone and have 100 per cent concentration then in theory you don’t have a collision.

“That’s the idea behind a day without a road death, it’s about getting everyone across Europe to wake up to that.”

* You can join the Trust in making TISPOL’s pledge to help reduce risk and improve safety on road journeys by visiting the Project EDWARD website.
Posted by llanblogger at 6:41 AM