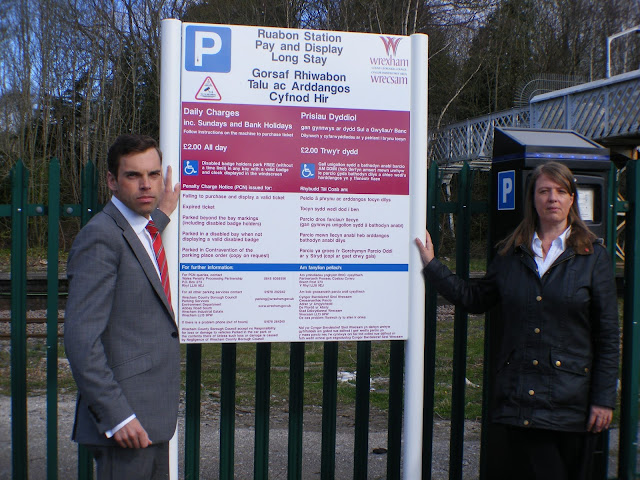 * Ken Skates AM with Cllr Dana Davies at Ruabon Station.

Wrexham Council has made ‘an utter mess’ of parking charges at Ruabon Station, according to opposition politicians.

Along with many residents and station users, Clwyd South Assembly Member Ken Skates and Ruabon councillor Dana Davies have previously criticised the authority over the introduction of a pay-and-display system at the popular station.

Now they say constant issues with the ticket machine are exacerbating problems – and have called on the council to address the situation.

Mr Skates and Cllr Davies last April suggested the council should reinvest money from the new parking charges – up to £400 a year per person – into improving the station’s facilities, such as better disabled access. But their plea fell on deaf ears at the Guildhall.

Cllr Davies, leader of the opposition Labour group said: “At least if the money had gone towards station improvements, commuters and users could’ve seen where it was going. This is purely a revenue stream, while at the same time the council is wasting hundreds of thousands of pounds of taxpayers’ money trying to demolish The Groves.

“Since the charges came in, people are parking anywhere but at the train station, including at the cemetery and in residential areas.

“These issues were raised at the time the decision was made, but our concerns were ignored. They are still discussed on a regular basis at Ruabon Community Council, and I’m getting a lot of complaints from residents.

“The ticket machine is also faulty on a regular basis and people often have problems paying for long-term stays. I was assured this would be looked at, but I’m still waiting.”

Mr Skates added: “I use this station and know how frustrating the parking payment system is. I also know how badly the charges have impacted on neighbouring householders, who are finding people parking all over the place. I have taken this up with the chief executive once again and hope to get a response in the very near future.”

Cllr David A Bithell, Lead Member for Environment and Transport, said: “I am flabbergasted at Labour’s hypocrisy, given the decision of the executive board on January 13, 2015, to introduce a Pay and Display service at Ruabon Railway Station - it is my recollection that this was a unanimous decision which included the two Labour members of the executive board at that time.

“It seems to me they have short-term memory loss, and I would suggest to Ken Skates AM that he needs to have more dialogue with his Labour members on Wrexham Council.”

Cllr Bithell added: “In respect of the issues raised, this was part of the revenue budget savings for 2015/16, where the Council had to make £11.6 million of savings. The department is also currently working with the local member on some localised issues around the use of Pay and Display at the car park.”