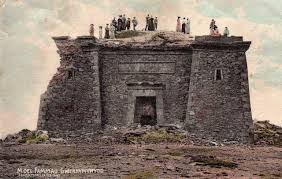 * An old picture of the Jubilee Tower.

A special walk is being arranged to mark the official opening of refurbishment work at one of the Clwydian Range's most historic landmarks.

Denbighshire and Flintshire Councils have worked together to develop a programme of works to reconsolidate parts of the Jubilee Tower at the summit of Moel Famau.

Parts of the tower have deteriorated over recent times and access onto the tower has become increasingly difficult.

The Jubilee Tower was built in 1810 to commemorate the Golden Jubilee of King George III. The original 120ft tower, set on a broad base, blew down in the 1860s and the remains have slowly deteriorated ever since.

Major repairs were carried out in 1969, but since then it has received very little attention – despite being one of the most visited spots in both counties – getting over 200,000 visitors every year.

In 2009 Flintshire and Denbighshire Councils, with support from the Clwydian Range AONB commissioned specialist conservation architects TACP to examine the condition of the building and to make recommendations for its repair and reconsolidation.

Now, with support from the Heritage Lottery Fund through the Heather and Hillforts Project, work has taken place.

The walk delegation will leave the Pen Barras car park at 2pm on Friday, 4 October for a leisurely walk to the Tower, where the new staircase to the tower will be officially opened.

David Shiel, Senior Countryside Officer for the Clwydian Range and Dee Valley AONB, said: "A careful study of the tower had identified key areas in need of repair and reconsolidation. Specialist stone masons have used traditional techniques to carefully repair the stone work and construct a new spiral staircase onto the tower.

"This is the first time in over 40 years that any significant work has taken place at the Tower. We have been really please to find that so much of the original monument had survived underneath the rubble.

"It has been a painstaking job to expose these parts of the tower that have lain buried for so many years. You can really get a sense of the original scale of the building."

Cllr Carolyn Thomas, chair of the Clwydian Range and Dee Valley AONB and chair of Flintshire County Council, said: "It is excellent news that we have been able to carry out this important work.

"The Jubilee Tower is such an iconic landmark for the Clwydian Range and many of the communities of both Flintshire and Denbighshire - but we have perhaps taken it for granted over the years – despite it receiving over 200,000 visitors every year very little has been invested over the last 40 years in safeguarding the fabric of the building.

"It's great that we are in a position to celebrate this work and to look forward to welcoming thousands people to this historic feature over the coming years."
Posted by llanblogger at 7:30 AM