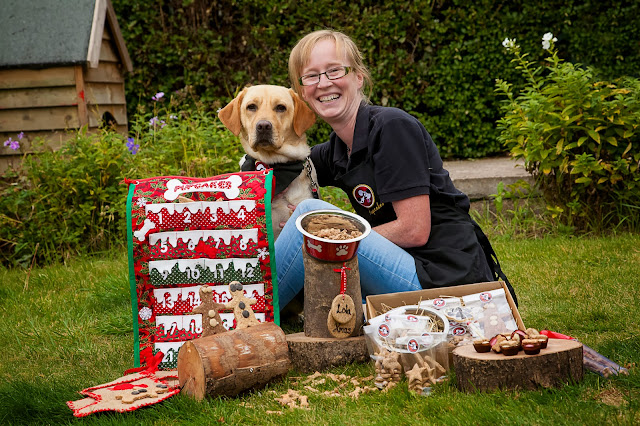 * Pupcakes...canine chef Sharon Ludgate with Lola the Lab and the Christmas treats for pampered pooches.

Christmas is coming early for pampered pooches in North East Wales - with a range of doggie treats being launched at a food festival for humans.

Canine chef Sharon Ludgate, 34, will be unveiling the new festive cakes and biscuits made for dogs at the popular Hamper Llangollen event being held on Saturday and Sunday, October 19 and 20.

According to Sharon, from Penyffordd, near Buckley , in Flintshire, who started her company, Pupcakes, earlier this year, her products are also suitable for human consumption.

She said: “I’m absolutely delighted and so excited to have been invited to attend the Hamper 2013 Llangollen Food Festival, it’s such a massive honour and privilege. 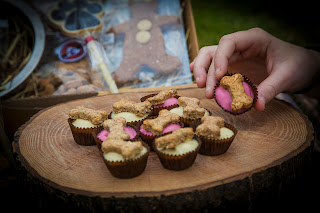 “On top of that I’ll be showing off my new doggie advent calendars filled with 24 little bone-shaped treats and Christmas stockings for dogs which are crammed full of a variety of treats.”

Sharon started Pupcakes with the help of her nine-year-old daughter, Emma, and her partner Scott, after spotting a gap in the market.

She explained: “We had a beautiful Labrador dog called George who was sadly a bit overweight. Most people know you shouldn’t give dogs chocolate but most commercially produced treats are still packed with sugar and fats, none of which does a dog a great deal of good.

“Emma and I used to make treats for George using wholemeal flour, fresh vegetables but no raw meat. It was all very healthy stuff and George used to love them.

“When George died of old age we took on a two-year-old golden Labrador called Lola. She was a rescue dog and grossly overweight when we got her.

“She has now lost a huge amount of that excess weight and really enjoys our healthy treats.”

She added: “I spent a year researching recipes before we launched Pupcakes and everything I make we taste-test ourselves, including Scott, who also looks after all the accounts and all the other admin tasks that comes with running any business.

“We now make a range of birthday cakes for dogs in a number of flavours including beef, chicken, minty lamb, peanut butter, cheese and carrot. Plus we make little biscuit bone-shaped treats which are hugely popular with my regular customers.

“I think people like what we do because they know we only use good wholesome ingredients and when we say there is no sugar and reduced fat in our products, people know they can trust us.”

Pupcakes is registered with Wrexham County Borough Council and Sharon labels all her products with a breakdown of their fat, sugar and protein content.

She said: “It means customers know what they are getting and trust that the product they are giving their pets is first class.

“The ingredients are all hand-picked and fresh, the cakes and biscuits are perfectly suitable for human consumption too. In fact Scott really likes them!”

Sharon, who works closely with Trelogan-based North Clwyd Animal Rescue Centre, says she got the idea of introducing a Christmas range after feedback from customers.

She said: “Our doggie birthday cakes are proving ever more popular as are our biscuits. But customers have started asking for cakes and special treats for other special events such as Halloween and pet pamper evenings.

“That gave me the idea to introduce a Christmas range and I have had a lot of interest already from regular customers.

“I spent months perfecting the Christmas recipes and getting it just right. I’m really happy with the range and particularly like our advent calendars, I just think they are superb.”
Sharon, has also just learned Pupcakes has been named BizMums Best New Business 2013.

She said: “I was amazed to learn some of my customers had nominated me for the BizMums award. I don’t know who nominated me but I’m so grateful to them.


“BizMums is a social enterprise that supports inspiring mums in business. It’s fantastic to be recognised in this way, especially as it is something of a new business idea. I've only just found out I have won and don't even know what the prize is yet although I know I get a special plaque.
“I’m now concentrating on getting ready for Llangollen where I hope to meet lots of dog owners wanting to treat their pets by giving Santa something special to pass on this Christmas.”


This year's Hamper Llangollen is being supported by the rural development agency, Cadwyn Clwyd.
Cadwyn Clwyd’s contribution came via the Rural Development Fund for Wales 2007-2013, which is funded by the European Agricultural Fund for Rural Development (EAFRD) and the Welsh Government.
Robert Price, Cadwyn Clwyd's agri-food project officer, said: "In addition to many favourites, we have lots of new food producers wanting to come this year and we're delighted that Pupcakes will be joining us this year.
"Although Sharon's products are designed with dogs in mind, they are also perfectly fine for people to eat. She's created a new food based business which is contributing to the local economy.
"The location of the Pavilion is absolutely  spectacular - I can't imagine that any other food festival in the UK has a more beautiful setting.
"It's also brilliant news for the local economy. If you buy from a local producer, all that money is recycled through the local economy and that sustains employment in our rural areas."
For more information about Hamper Llangollen 2013 go to: www.llangollenfoodfestival.com
Posted by llanblogger at 8:00 AM