Local Friends of the Earth group has cause for celebration 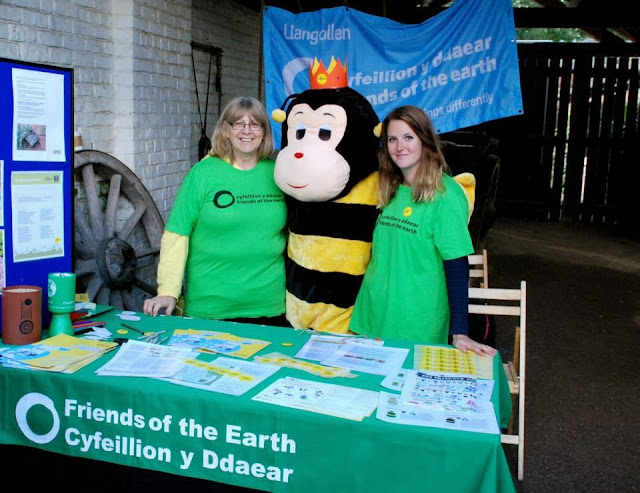 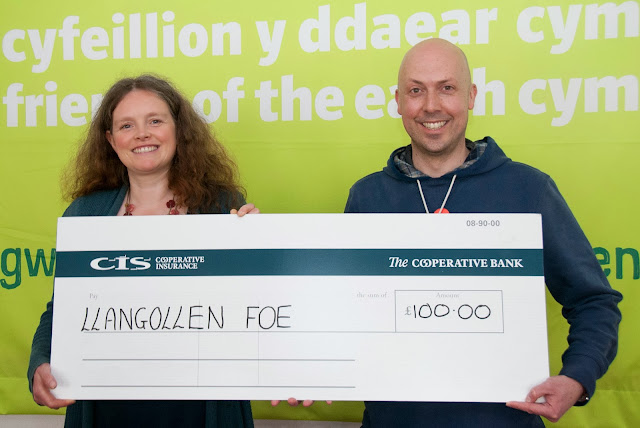 * The Mike Jacobs award celebration with Catherine Veasey, Llangollen Friends of the Earth (left) and Bleddyn Lake, Local Group Development Officer for Friends of the Earth Cymru.
Llangollen Friends of the Earth were once again at the recent Erdigg Apple Festival.
They ran a ‘Bee Cause’ stall complete with a giant bee and had a double cause for celebration.
The national Friends of the Earth Bee Cause has won its two-year campaign for both the Welsh and UK government to sign up to new Pollinator Action plans following huge public support.
But the Llangollen group were also celebrating their own personal double victory.
They won the Welsh Mike Jacob Award for the best local group in April and went on to win the Earthmovers 2013 award at the National Friends of the Earth Conference in July.
“To win both has been fantastic,” said member Catherine Veasey.
“At the national conference we were up against groups from England and Northern Ireland too.  We feel very proud that we came ahead of large city groups like Manchester who were also nominated.”
The group's success comes after a busy year involving a wide range of activities including setting up the new Llangollen Community garden project which was visited by MP Susan Elan Jones in May, collaborating with the town council on its successful Cittaslow application, taking part in the Llangollen Fringe community art project and hosting a North Wales local groups gathering in June.
“We are a small group,” said co-ordinator Warren Davies, “but we play to the strengths and interests of our members; its been a busy year, but we have had a lot of fun alongside the campaign work too.”
The group also has an active web and Facebook page to keep in touch.  To find out more visit www.facebook.com/llangollenfoe  or www.foe.co.uk/llangollen
Posted by llanblogger at 7:59 AM