Operatic's stunning My Fair Lady is right up your street 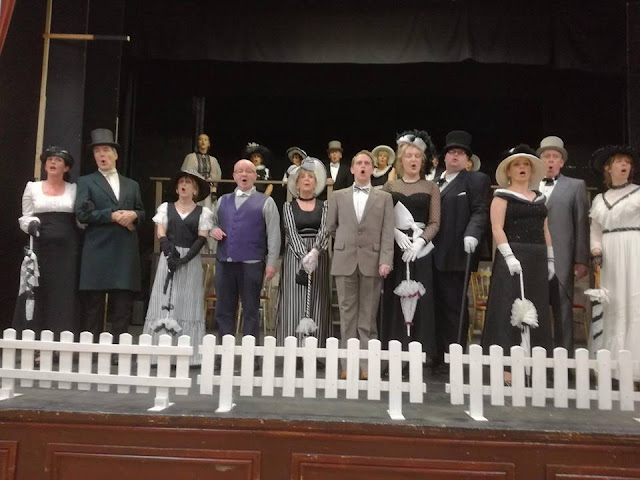 * The memorable Ascot scene from the Operatic's My Fair Lady.

If you’re a lover of big stage musicals then the latest offering from Llangollen Operatic Society is going to be right on the street where you live.


The society last performed that Lerner and Loewe evergreen 30 years ago and a handful of cast members who were in it back in the Eighties have returned to add their experience to the current production which opened last night in the Town Hall and runs for the next four evenings plus a matinee on Saturday.
The show tells the well-known tale of Eliza Doolittle, an awkward Covent Garden flower girl who is transformed into the fair lady of the title by prickly phoneticist Professor Henry Higgs in Edwardian London.


But while Eliza is fashioned into an elegant and poised beauty by the Prof the often painful transformation has the unexpected side-effect of bringing out the human side of the curmudgeonly bachelor academic.
Taking the key role of Eliza is stunning new am-dram star Esme Sallnow who was simply made for it. She looks the part, can act up a storm and has the kind of voice the composers must have imagined for their female lead.


Higgins is played by Llan Operatic stalwart Chris Sims who brings to the enormous and challenging part just the right amount of crustiness contrasted with humour.
Another actor precisely of the kind Lerner and Loewe must have had in mind when they were working up the loveably cheeky character of Alfie Doolittle, the dustman dad of Eliza, is Bill Hughes. With the ability to become indefatigably Cockney right down to his gorblimey trousers, he has one of the best and most powerful voices you’re ever likely to hear on an amateur stage anywhere.


The excellent John Clifford, with whom Llangollen audiences are familiar from a diverse range of roles, shines again as Colonel Pickering, Higgins’s bumbling yet kind-hearted sidekick, and another Operatic favourite, Alison Ravenscroft, plays the Professor’s housekeeper, Mrs Pearce, with all her usual polish.
Graham Kelly gives a good interpretation of Freddie Eynsford-Hill, the mooning toff who makes a play for Eliza’s heart.


With My Fair Lady it’s the unforgettable songs which have haunted audiences down the decades since this conversion of George Bernard Shaw’s Pygmalion was first staged back in the 1950s.
And the way the Llan cast of almost 40, augmented with some budding talent from its Young 'Uns junior section, presents them with gusto and feeling does each one perfect justice.

From the touching I Could Have Danced All Night from Eliza to the crafty With a Little Bit of Luck from Alfie Doolittle and from the hopeful On the Street Where You Live from Freddie to the rousing Get Me to the Church of Time by the whole ensemble everyone's a winner.


As well as the musical numbers lots of time has clearly been lavished on the choreography and plenty of work has also gone into the period-correct costumes and eye-catching stage settings, none more so than the famous black and white Ascot scene which is stunning to both see and hear.
The show is a real spectacular and a credit to director Leigh Mason, artistic director Joanne Lloyd and producer Helen Belton who brought the whole thing together is remarkable style.


My Fair Lady is on at 7.30pm each evening of the run with the Saturday matinee starting at 2pm.
* Tickets, at £12 and £10 concessions, are available from Bailey’s, Gwyn the Butcher and Jades in Llangollen town centre as well as by phoning Stella Bond on 01978 860441 or by going online at: www.ticketsource.co.uk/llangollenoperaticsociety (fee applies).
Posted by llanblogger at 7:02 AM