Railway volunteers reach end of the line in Corwen 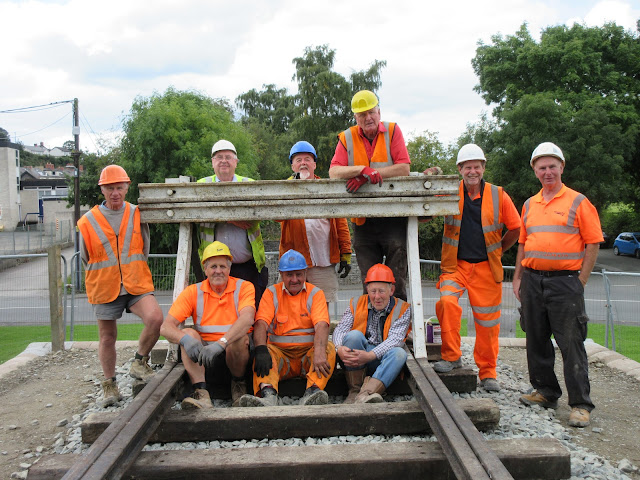 * Railway volunteers at the buffer stop in Corwen.

Llangollen Railway volunteers celebrated getting to the end of the  line when the buffer stop was inserted onto a previously prepared site on the embankment at Green Lane, Corwen.

The stop completes the track bed for the laying of rail as the head shunt at the western extremity of the project for the Corwen Central station.

This will permit locomotives to detach from a train at the station platform and reverse around the loop line to attach to the rear of the train in readiness for the return journey to Llangollen.

The buffer stop now in situ should be seen as a statement of intent that the terminal station project is on track for completion in 2018.

However, it is not the end of the project as there is much still to do to complete the new station before it is ready for use.

Not least is the infilling of a breach in the embankment at the eastern end of the site, a former access to the Welsh Water Treatment Works, which currently allows for delivery of materials to the railway development.

This summer the volunteer workers have created the 160 metre long wall for the arrival platform which has consumed some 3,800 concrete blocks and they are currently laying the edging flags to complete the work.

Their hours spent in building the station have been valued at £200k, without which input the project would be unaffordable. The further challenge for the autumn is to complete a shorter wall on the other side of the platform area.

Commenting on the work, the Project Leader, Richard Dixon-Gough, said: “Our photo-session with the volunteers placing the buffer stop at the end of the tracked bed was a notable occasion. It represented the culmination of all the hard work and endeavour over the past 40 years since the idea was conceived of rebuilding the railway between Llangollen and Corwen by volunteer effort.

"We all look forward to the first train arriving at the new terminus as soon as we can get the rest of the station completed and linked up with the railhead at Dwyrain Corwen East temporary station.”