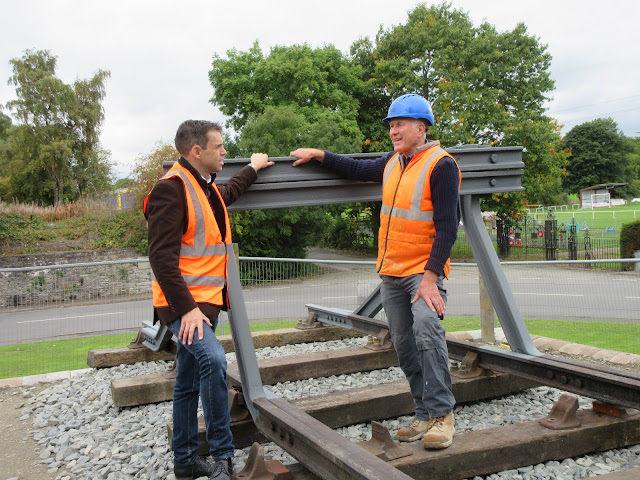 The Clwyd South AM joined members of the Llangollen Railway team on Saturday to see how their work to create a platform at Corwen Central Station is developing.

The Welsh Government is providing funding of £128,000 – around 80% of the total costs – to build an island platform at Corwen, where a volunteer workforce, aided by contractors, has re-engineered the disused railway embankment to accommodate a new terminal.

Mr Skates said: “I’m thrilled for the team that this Welsh Government investment will help expand Llangollen Railway services to Corwen town centre. This is fantastic news for the company, the local economy and for North East Wales’ thriving tourism industry.”

The 160-metre platform will allow an eight-coach passenger train to be accommodated on one side and a smaller six-coach train on the other, maximising visitor numbers to Corwen.

The new platform is situated close to the town’s car park and bus interchange and a concrete subway has already been constructed to access the elevated platform.

Mr Skates said: “This is also a good example of how the Welsh Government’s Rural Development Programme is delivering real improvements for local communities.”

Project leader Richard Dixon-Gough said: “The project team members were pleased to be able to show Ken how much had changed on site since his last visit and the way in which Welsh Government grant aid had aided the building of the platform."
Posted by llanblogger at 6:33 AM