Celebrated chef to showcase his skills at Hamper Lllangollen 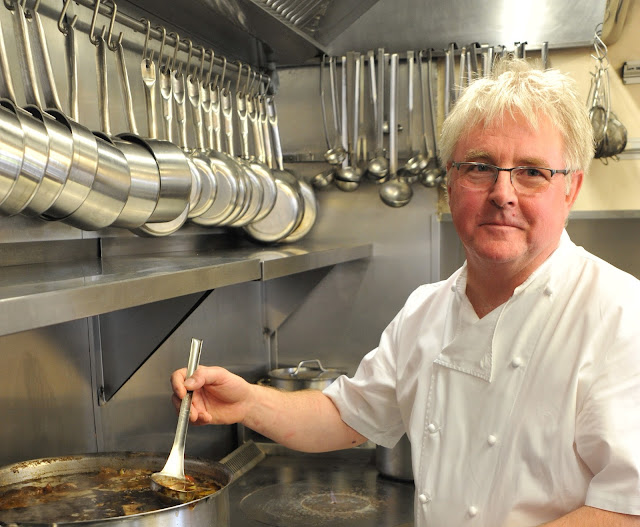 * Chef Bryan Webb in the kitchen at Tyddyn Llan.

The Dee Valley chef in charge of one of the finest restaurants in Wales will be demonstrating his culinary mastery at a top food festival.

Michelin starred Bryan Webb has just seen his Tyddyn Llan restaurant with rooms in the picturesque Denbighshire village of Llandrillo retain its commanding position in the Good Food Guide for the 15th consecutive year.

And he’ll be showing off his award-winning skills to food fans at Llangollen Food Festival which will celebrate its 20th anniversary at this year's event on October 14 and 15.

The event has been named as one of the Top 10 food festivals in the UK by the Daily Telegraph and Independent newspapers.
It's estimated the festival pumps nearly £400,000 into the local economy every year, making a total of £8 million since it started two decades ago.

Along with his wife Susan who runs front-of-house, 57-year-old Bryan took over at Tyddyn Llan in 2002 following a glittering career with some of London’s most famous eateries.

His artistry in the kitchen saw him win his first glowing mention in the Waitrose Good Food Guide, which he describes as his lifelong culinary ‘bible’, during his first term as a head chef at Hilaire on Old Brompton Road in London 30 years ago and went on to win some of its highest gradings in subsequent editions.

The success story continued when he moved back to his native Wales and took the helm of Tyddyn Llan 15 years ago since when his Good Food Guide accolades have continued to flow.

The latest edition gives the restaurant a prestigious ranking of six, which he says means there are only three others in Wales with a higher grading and 50 in the whole of the UK.

Bryan said: “My latest mention in the guide makes me very proud and I’ll be celebrating it at Llangollen Food Festival which is marking its own 20th anniversary this year.

“Cooking has changed a lot over the last 20 years which is mainly due to the number of food programmes on the TV. More and more people are now looking for things like good, local home produce and craft beers and they all come together at Llangollen Food Festivals.

“For my demonstration I’ll be showing some of the dishes I cook at Tyddyn Llan, and preparing sea bass with a lava bread and butter sauce, a Welsh black beef steak with a peppercorn sauce and a local rack of Welsh lamb accompanied by whatever is freshly available in October.

“I want to show how easy it is to cook a nice piece of fish or steak. Cooks at home worry about either having the pan not hot enough or too hot so it will burn the meat, so I want to show them how to overcome these problems.”

Bryan was brought up in Crumlin, Caerphilly, where his father worked as a mines rescue manager. Experiencing at close hand the harsh realities of mining he decided early on that the job wasn’t for him.

A youthful eating experience at The Walnut Tree in Abergavenny introduced him to good food.

He left school at 16 and started an apprenticeship at The Crown at Whitebrook, the first Michelin-starred restaurant in Wales, training under head chef Sonia Blech.

His next position was at Drangway in Swansea, where he worked under Colin Pressdee. While at this restaurant, in 1980, he won the William Heptinstall Award, given to young chefs to widen their culinary experience abroad. The prize was a three-month placement at top French restaurant Mère Poulard in Mont-Saint-Michel.

In 1983 he took a position in Scotland, at the Kirroughtree Hotel near Newton Stewart working under Ken McPhee who was then one of Scotland’s finest culinary practitioners.

After two years he headed for London, taking a head chef role at Café Rouge - no connection to the chain - where the owner was set on establishing a highly rated restaurant.
He was then appointed head chef of Hilaire in London, becoming chef-proprietor after four years.

In 2002, Bryan and his wife Susan embarked on a tasting trip around the world, before returning to Wales to set up Tyddyn Llan based in a handsome grey-stone building set within lush Denbighshire countryside.

In 2010, Tyddyn Llan won a Michelin star, one of only four restaurants in Wales to hold such an accolade, and has retained it ever since.

Bryan is currently awaiting notification that Michelin will recognise him again but is pretty confident of success.

He said: “The competition gets harder every year and there are always new kids on the block but Michelin is looking for the serving of good food consistently and I’ve always had a passion for doing that. Also, I’ve just had my invitation to the presentation ceremony and I don’t think you’d get that if they were going to take away your star!

“I see my latest listing in the Good Food Guide as quite as quite an achievement as all my life it’s been my bible and they’ve always been good to me. I started being listed 30 years ago when I had my first head chef job in London and was consistently getting high ratings. That’s continued with Tyddyn Llan for the past 15 years.”

His cookbook, Bryan Webb’s Kitchen, came out in 2010 and includes his signature dishes and recipes inspired by his food heroes. To mark his 40th anniversary in the business Bryan published his book Not Bad For A Taff, which is part autobiography, part rich collection of recipes.

Phil Davies, a Llangollen Food Festival committee member, said: "We're delighted that Bryan will be demonstrating at our anniversary event.

"With his fabulous food at Tyddyn Llan, he has done a huge amount to put the area's culinary credentials on the map.

"This year's festival promises to be one of the best ever with a record number of around 120 stall-holders."

* To find out more about Llangollen Food Festival go to: www.llangollenfoodfestival.com
Posted by llanblogger at 6:21 AM