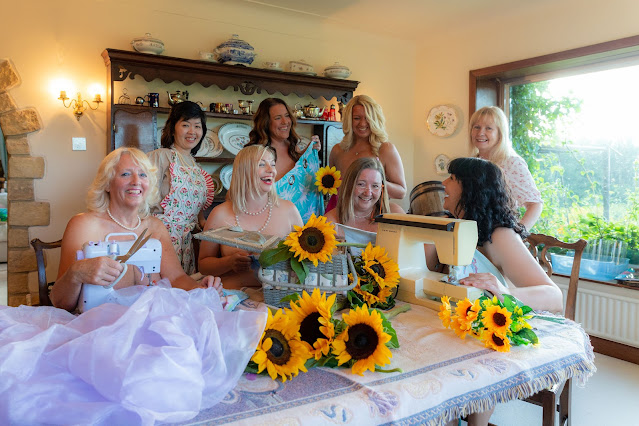 * The Calendar Girls and helpers. Picture by Gem Photography.

Llangollen Operatic Society are making a welcome return to the stage after a three-year pandemic gap later this month.

And the production they have chosen is a cheeky little number that will see the main cast members not being too much of a burden to the costume department.

Because from August 31 until September 3 they are presenting the musical Calendar Girls at Llangollen Town Hall.

In April 1999, the real-life ladies of the Rylstone and District Women's Institute in Yorkshire produced a cheeky nude calendar to raise money for a hospital that had cared for one of their husbands before he died of cancer.

They could hardly have known that their story was going to be the female Full Monty.

The Operatic grabbed the rights for it back in 2020 thinking it would be a great smaller cast summer show.

But, according to Tracey Jones who is co-producing with husband Mike, it has turned into something much bigger.

She said: "Because of Covid, it's been three years since our last adult production.

"Calendar Girls is an emotional roller coaster show based on the true Calendar Girl story that has also been depicted on film starring Julie Walters, Helen Mirren and many more top British actors.

"The musical version was adapted and written by Tim Firth with music by Gary Barlow.

"Our show is directed by Nia Pickering, with artistic assistance from Sarah Marshall and musical direction by Elen Mair Roberts."

"They are supported by more fabulous talent including Robin Crowley, Neil Barrett and Jim Allen as the ladies' other halves.

"Then we have our amazing younger cast joining us from the Operatic's junior section, the Young 'Uns, who are playing the ladies' offspring - Celyn Orton-Jones, Ethan Le-Cheminant and Aled Morris.

"The story focuses on the passing of Annie's husband John, being played by Tessa's real-life husband Simon Orton Jones, so it's a real family affair.

"None of this can happen without the ensemble, stage crew, technicians, and members of the society together with great support from local businesses.

"We hope to see local audience support back at great Town Hall when we open."

* For ticket details, go to: www.ticketsource.co.uk/llangollenoperaticsociety