Police clamp down on illegal drivers

North Wales Police will be putting the brakes on illegal motorists during a two-week campaign which started this week.

As part of the crackdown against those who drive whilst disqualified, drive with no insurance or drive without a valid driving licence, officers will be out and about targeting those who flout the law.
Members of the public are being encouraged to report a criminal if they suspect them to be breaking the law. 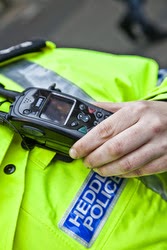 “We strive to improve road safety for all and send a clear message that committing these type of offences whilst driving will not be tolerated on the roads of North Wales,” said PC Vincent Jones who is leading on the campaign on behalf of North Wales Police’ Roads Policing Unit.
“We will be targeting the minority of individuals who choose to break the law, saving the ordinary driver from higher insurance premiums and reducing road casualties.
“We stop and seize vehicles that are found to be on the road illegally throughout the year however this two-week campaign specifically focuses on those individuals in a bid to help make the roads a safer place across the region.
“Anybody found to be driving illegally can face being arrested. We will use all available powers to seize illegal vehicles and remove them from the roads. The consequences for them can be anything from a fine, to points on their licence to having their car scrapped."
“Many uninsured drivers use their vehicles to facilitate their illegal activities and denying them the use of the roads makes it harder for them to commit crime. We will work with people in our communities to help rid the roads of illegal drivers.
During the campaign officers will be utilising ANPR (Automatic Number Plate Recognition) technology and they will also be in contact with their colleagues at the DVLA and Motor Insurance Bureau. Coordinated operations including road-side checks will be carried out across North Wales.
So far in 2014 North Wales Police 92 arrests have been made with regards to illegal driving and during the same period 592 vehicles have been seized under Section 165 of the Road Traffic Act.
PC Jones added: “It frightening to think that so many people are behind the wheel when they shouldn’t be. Vehicles in the wrong hands are effectively killing machines. The public can be reassured that we will not tolerate crime on our roads therefore if you suspect an illegal driver please contact us.”
North Wales Police has a robust strategy around enforcing the ‘Fatal 5’ offences which are drink and drug driving, dangerous driving including unnecessary risk taking, speeding, failing to wear a seatbelt and using a mobile phone whilst driving. These offences will also be looked at during the two-week campaign.
·         In 2013 North Wales Police seized a total of 1,135 vehicles under Section 165 of the Road Traffic Act. During the same period 145 arrests were made with regards to illegal driving.
Penalties for illegal drivers can include:
Uninsured drivers are:
Key Facts: from Motor Insurance Bureau:
.
Posted by llanblogger at 7:06 AM