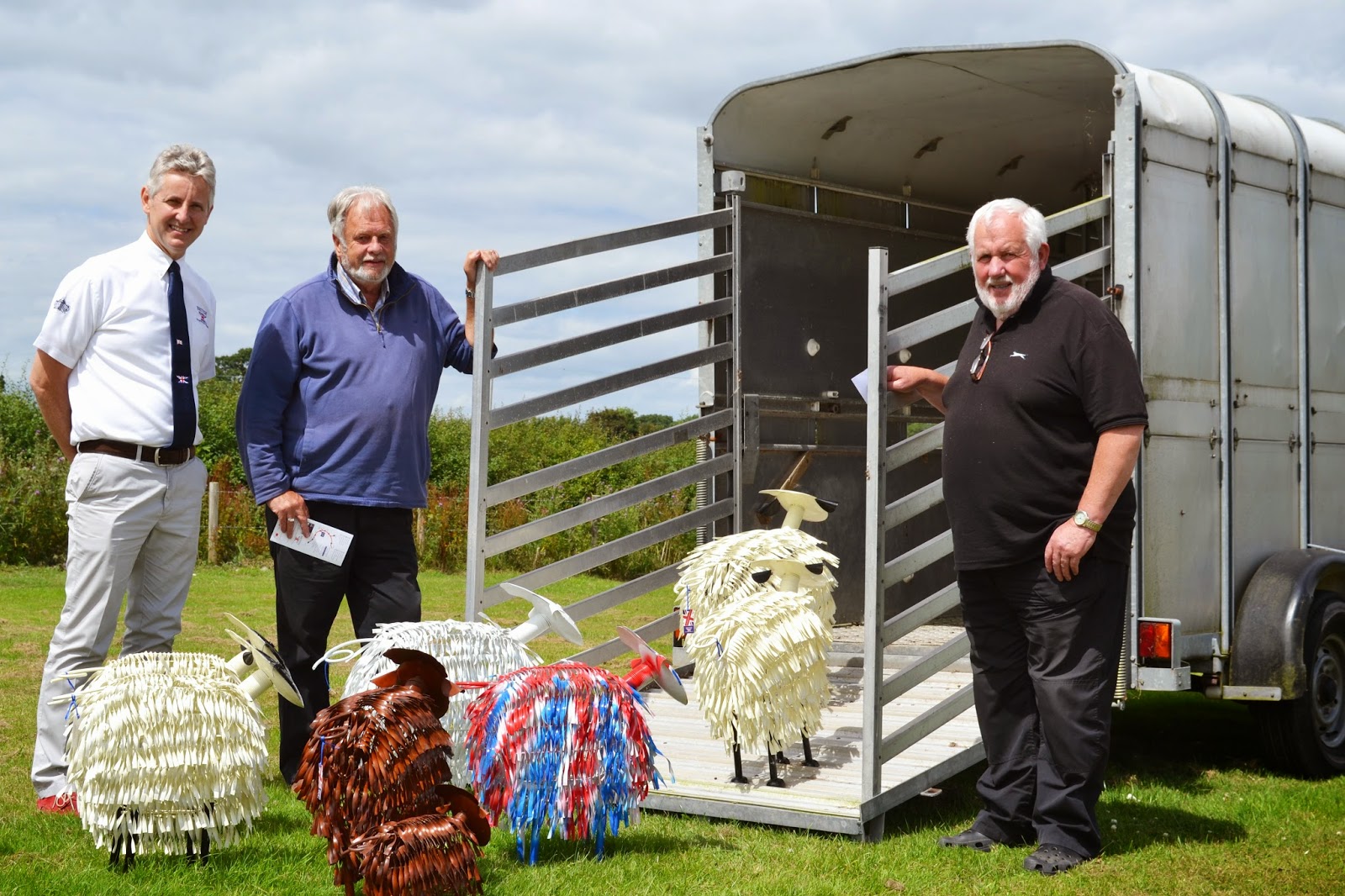 
Forget the Russell Crowe film blockbuster Noah - an array of iron animals is set to take pride and place at a top food festival.
Around 30 sculptures created by the British Ironworks Centre, Oswestry, will make their way to Hamper Llangollen later this year on October 18-19.
These will include a flock of iron sheep, chickens, a giant boar and a giant ostrich.
The event, hailed as one of the Top 10 food festivals in the UK, is supported by the rural development agency, Cadwyn Clwyd.
Cadwyn Clwyd’s contribution comes via the Rural Development Plan for Wales 2007-2013, which is funded by the European Agricultural Fund for Rural Development (EAFRD) and the Welsh Government.
Hamper Llangollen Chairman Colin Loughlin asked the creative metal workers to support the event after spotting a three and a half tonne Uri Geller-inspired gorilla made from spoons at the Llangollen International Musical Eisteddfod.
Colin, who is delighted that the British Ironworks Centre has chosen to sponsor the festival, said: “If you go down to the British Ironworks Centre and just go down the drive it looks like a giant safari park, with all sorts of exotic animals all over the place – it’s incredible.
“It came about because they sponsored the Llangollen Eisteddfod. I asked if they could provide us with some tables and chairs like they’d done for the Eisteddfod and they said that they’d go one better and bring along some iron animals as well.
“The animals will reflect what is happening at Hamper Llangollen. For example there is going to be a stall there that sells ostrich meat and wild boar. It's going to be a bit like an iron version of Noah's Ark - minus Russell Crowe!"
Clive Knowles, Managing Director of the British Ironworks Centre, added: “It’s to add drama and theatre to the event.
“I’ve never been to Hamper Llangollen and I’m really looking forward to it. I really love Welsh lamb so I’ll be looking for a bit of lamb shank while I’m there.
“Colin said they had a lot of natural and free range things going on so we want to reflect that with the sculptures we bring to Hamper Llangollen.
“We’re going to bring around 20 small pieces and about 10 large ones. The large ones can weigh up to three tonnes.
“Hamper Llangollen is a fantastic opportunity for us to showcase what we can do.
“We’re going to be opening our own café at the British Ironworks Centre so it’s also an opportunity for us to source local produce. Sourcing local produce is incredibly important and it’s something that people are looking for more and more these days because it’s good quality and people want to support their community.”
A quartet of Wales’s best chefs will have a starring role at the festival. Graham Tinsley, executive chef at Carden Park in Cheshire and Conwy’s Castle Hotel, will be cooking up a Welsh feast with Mike Evans, hospitality lecturer at Coleg Llandrillo, Rhos on Sea, and Dion Jones, one of Europe’s finest young chefs.
The ever popular Dai Chef, now the resident chef at Bodnant Welsh Food, the centre of excellence for Welsh food in the Conwy Valley will be there too.
Robert Didier, a baker who trained with culinary legend Raymond Blanc will also unveil the UK’s most expensive loaf – made with champagne and 24 carat gold, at the event.
Cadwyn Clwyd’s Agri Food Officer, Robert Price, believes this year’s festival is going to be one of the best ever.
He said: “Thanks to a whole host of indigenous companies like Orchard Pigs, North East Wales is rapidly establishing a reputation as a centre of excellence for high quality cuisine.
“The food festival is a perfect shop window for the companies who form the backbone of our rural economy.
“The location of the Pavilion is absolutely spectacular – I can’t imagine that any other food festival in the UK has a more beautiful setting.”
For more information about Hamper Llangollen 2014 visit www.llangollenfoodfestival.com
Posted by llanblogger at 6:56 AM