Town crier's bell tolls to signal "save our bank" protest 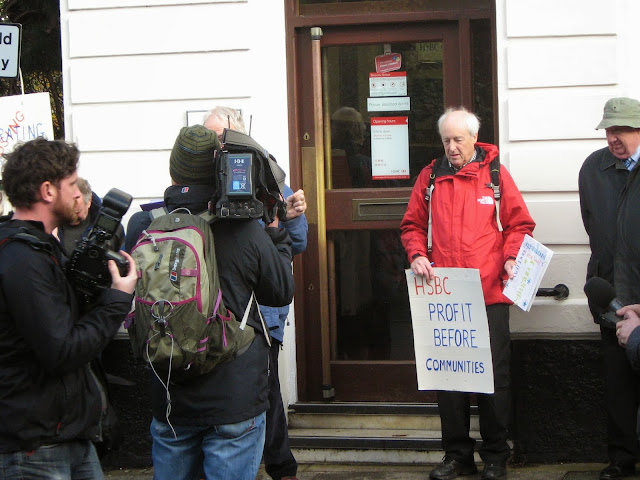 * Chamber of Trade and Tourism chairman David Davies before
heading inside the bank with the 150th anniversary card. 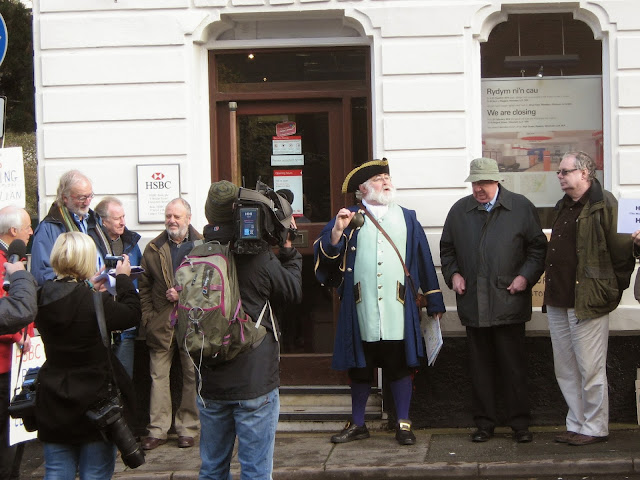 
PROTESTERS gathered outside the HSBC bank in Llangollen earlier today (Thursday) to show their anger at the branch being axed as part of a regional closure programme.
On the stroke of noon, town crier Austin Chemenais tolled his bell to draw attention to the demonstration in Bridge Street which was timed to coincide with a celebration of the 150th anniversary of banking in the town going on inside.


The protest was organised by members of Llangollen Chamber of Trade and Tourism whose chairman, David Davies, went into the branch with a large card marking the anniversary and expressing local hopes that it would stay open for another 150 years.
Mr Davies emerged shortly afterwards to say that a senior manager from HSBC in Wrexham had politely accepted the card but had refused to come outside to speak to the protest group who were being filmed by press photographers and TV crews.


“We’ll now wait to see what happens as a result of our protest,” said Mr Davies.
“We had sought a meeting to discuss the closure of the branch with the HSBC’s regional manager but she has turned us down.


“We don’t want this very valuable branch to close but we would like to at least discuss other possibilities such as it remaining open a couple of days a week.”
Llangollen is one of three HSBC branches earmarked for closure next February, along with those in Conwy and Beaumaris, as a result of a claimed fall in trade due to more customers doing business online.


Bank bosses say the administration of accounts will be transferred from Llangollen to Wrexham with five staff being deployed elsewhere within the group.
There has been cross-party condemnation of the closures from local politicians and the issue was raised in the Welsh Assembly earlier this week.

Responding to one North Wales AM who questioned the closures, HSBC regional director for the south west and Wales, Rachel Thomas, said: “Whilst we fully understand the depth of feeling about our decision to close this branch, the decision is final.


“We therefore believe that our time is best spent providing tailored one to one support to our Llangollen customers who may have problems accessing banking facilities and ensuring that their needs are catered for in the best way possible.”


Clwyd South AM Ken Skates said: “The turn-out today just goes to show the strength of feeling over this issue in Llangollen, and we can only hope HSBC takes note.
"I am in the process of trying to arrange a meeting with the regional director so we can sit down and see if there is anything that can be done to keep HSBC services in the town or to see if the building can be put to community use should the company follow through on its plans.
“I am only too aware how angry and upset people are about this, and HSBC’s arrogance and refusal to engage with the community certainly hasn’t helped matters.
"With the closures of branches in Cefn Mawr, Rhos and Corwen in recent years the bank appears to be turning its back on the area, so they should not be surprised if some of their loyal customers in my constituency now decide to turn their backs on HSBC.”
Posted by llanblogger at 1:46 PM