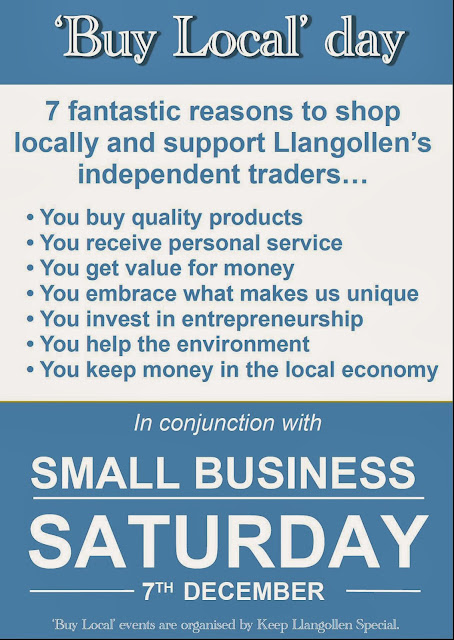 Campaigners in Llangollen are planning to stage the biggest Buy Local Day of the year early next month.


Keep Llangollen Special (KLS), which was set up to support businesses in the town in the face of what they see as a major threat from the planned Sainsbury’s supermarket, organises the Buy Local days at regular intervals throughout the year.
And it has now decided to hold the pre-Christmas event on Saturday, November 7, to tie in with Small Business Saturday.
As revealed by llanblogger yesterday, this is a concept which came originally from the USA, where it has helped increase spending in small businesses and bring in more long-term customers by creating a buzz on the high street.

It also helped small businesses network with each other, championed their role in local communities and highlighted the role of entrepreneurship.

The idea is being promoted locally by both Clwyd South’s MP, Susan Elan Jones, and Assembly Member, Ken Skates. 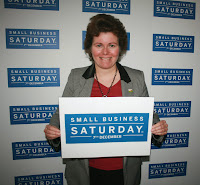 Susan Elan Jones MP (pictured left promoting the idea) said: “Small businesses are important everywhere, but they are especially vital in an area like ours which contains so many villages and small towns. We need to give all the support we can to small businesses so that they do not go under in times of economic downturn.”

KLS was to have held its Christmas Buy Local Day on December 13 but after learning of the Small Business Saturday idea from the llanblogger story, members have now decided to stage the event on December 7, which, according to chairman Martin Crumpton, will “make a big day even bigger!”


He said: “We have also contacted the three banks in Llangollen to ask them to open their branches for the day.
“Many people will take advantage of Buy Local and the opportunity to buy for Christmas. We have local produce in town that’s second to none; what a treat for friends and relatives!
“We’ll do everything we can to make it the best trading day of this year’s calendar and call on everyone, from individual traders to the Town Council to get the Christmas decorations to the very highest standard to showcase what a wonderful, vibrant town centre we have.”


Mr Crumpton added: “Meanwhile, please remember we need evidence to present to HSBC where their closure will cause hardship to people who need to see human beings for their banking.
“Perhaps the regional managers at HSBC will get a nice visit from Father Christmas if they’ll let us negotiate with them?”
Posted by llanblogger at 8:00 AM