Councillor urges people to move their business away from HSBC

A Llangollen county councillor has taken his business away from HSBC in protest at the bank's decision to close its branch in the town.

Stuart Davies, who was at yesterday's protest outside the bank in Bridge Street, has just written to senior bank bosses to complain about their "intransigence", through its regional manager Rachel Thomas, in refusing to discuss the closure, due in February next year, with local representatives such as himself. 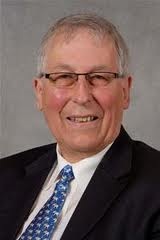 Cllr Davies (pictured right) tells them he has already transferred his savings to a rival bank and has urged other local people to do the same.

In an email to HSBC, Cllr Davies says he was elected on his promise to help safeguard jobs and generate more and suggests the closure of a major bank branch in Llangollen does nothing to help that pledge.

He says: "I urge fellow politicians to join him in putting pressure on the higher ups in HSBC to reverse the decision.
"I also call on the public to vote with their feet.

"Today I initiated the process of transferring all my savings and accounts to Barclays from HSBC, a process made easier by the recent changes to help make transfers easier.

"By doing this, not only do we make our point to HSBC, we actually help to strengthen the remaining banks in Llangollen by increasing their business.

"Perhaps when HSBC senior managers see the amount of savings flowing out of their coffers to their rivals then market forces might start to apply to them."

One of the recipents of Cllr Davies's message is HSBC chief executive officer lan Keir from whom he requests the "courtesy of a reply".
Posted by llanblogger at 3:24 PM