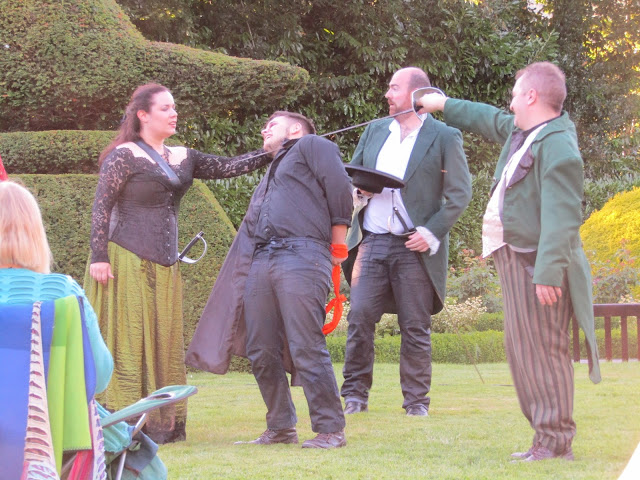 * A slice of action from last night's production of Zorro at Plas Newydd.

The wit flew as fast as the flashing blades in last night's open-air production of Zorro at Plas Newydd.

As a large audience munched on their picnics and sipped their chilled wine, 17 members of the Off the Ground theatre group thrilled with this touring tale of old New Meckicko, which was a little heavier on the comedy than the high drama.

On the brink of Mexican Independence, the Viceroy of New Spain, aided by the evil Ramón family, has turned New Mexico into a tyrannical, poverty-stricken wasteland for the townspeople.

Their legendary hero, Zorro, is their only hope of relief and resolution.

As the rebel group, The Alliance, attempt to fight back, Zorro must be smarter than he has ever been to keep the Ramóns from turning his beloved people against him.

Can he change his ways to stop them? Well, of course he can.

With the aid of his trusty rapier and cunning our hero, played nicely by the aptly named Felipe Pachero, rights all wrongs and in a couple of brisk acts vanquishes all the sneering baddies - male and female.

Unfortunately, one thing he couldn't deal with were the midges but, heck, we were in the great outdoors.

Along the way there were plenty of laughs, not least of which came from the direction of Esteban the second-hand mule salesman played by Eric J Blakemore, a particular audience favourite.

But the entire company were stars and it was a great night's theatre.

Let's see more al fresco entertainment in this wonderful local setting.
Posted by llanblogger at 9:35 AM