Llangollen Railway's annual Autumn Steam Gala is taking place on Friday, Saturday and Sunday this week and offers fun for all the family.

There will be five historic steam locomotives in operation, working an intensive timetable between Llangollen and Corwen, with many attractions and activities going on along the line.

Visiting the line specially for the weekend is a Victorian-era steam locomotive, No.12322, which was originally built for the Lancashire & Yorkshire Railway in 1896 and its normal base in Greater Manchester. 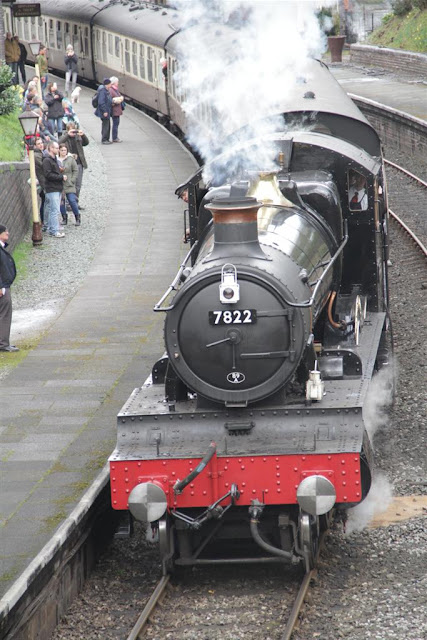 Adults and children alike can explore the railway with the fun quiz, whilst at Carrog station the miniature steam railway will be in operation, offering rides in the station yard. The scenes of yesteryear will be recreated at Berwyn, with demonstrations of parcel loading taking place at 12.20pm and 2pm on each of the three days.

Look out for Walter the prized racing pigeon being loaded onto the train, along with milk churns, parcels and Cuthberts seeds boxes!

On the Friday and Saturday evenings, a special Real Ale shuttle service will be in operation between Llangollen and Glyndyfrdwy stations, where the line's Cambrian Bar will be open.

On the Sunday, two long-scrapped steam locomotives will be recreated. Resident No.7822 'Foxcote Manor' will be running as a sister No. 7811 'Dunley Manor', which was based at Shrewsbury and Wrexham sheds for a time.

The 50th anniversary of the closure of the much lamented Somerset & Dorset Railway will also be marked by the renumbering of resident BR Standard locomotive No. 80072 as former S&D stalwart No.80043. After the gala, No.80072 will be transported south by road to the former S&D station at Midsomer Norton, where it will be in operation on a restored stretch of the route.

Construction work on the railway's new western terminus at Corwen Central can be viewed on all three days of the gala. Guided tours will be on offer at regular intervals, with volunteers on-hand to discuss progress on the new station.

The Souvenir Guide for the gala, including all timetables, events and quiz, is available to download for free from the Llangollen Railway's website: http://www.llangollen-railway.co.uk/event/autumn-steam-gala/

Discounted advance tickets for one, two and three day rover tickets are now available from the railway's website, offering considerable savings (up to £24) on prices on the day.
Posted by llanblogger at 6:35 AM