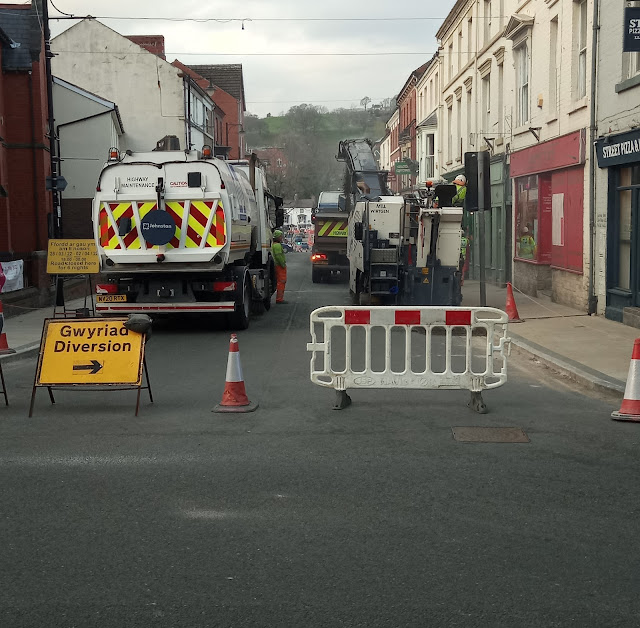 * Heavy equipment moves into position on a closed Castle Street.

At 6pm the street was closed from the A5 to the A539 with only a short section from Parade Street to the bridge remaining open, controlled by lights, for traffic coming out of Parade Street in the direction of the A539.

The night-time closure will remain in force until midnight with diversions in place for through-traffic.

From around 6.45pm tonight heavy road-laying equipment, some of it delivered on low-loaders, began to move into place at the A5 end and begin the operation.

The night works will continue until this Friday, April 1.

Oak Street was also closed off by diversion signs this evening.

Phase one of the work will involve resurfacing Castle Street between its junction with the A5 and the Market Street junction.

Phase two, which will involve surfacing Castle Street between the Market Street junction and the Mill Street/Abbey Road junctions, will commence in early May.

Lloyd's Coaches posted earlier today on social media that during this closure evening service T3 will divert between Ruabon & Llangollen Via A483 / A5 Froncysyllte and will be unable to serve bus stops at Plas Madoc, Acrefair, Trevor & Llangollen Parade St & Bridge End. Buses will pick up and set down passengers in Llangollen on A5 near to Stans Garage.

The re-surfacing is part of the town's on-going 2020 project.

The works, which started in October and are due to be completed in May, are being undertaken by the county council in partnership with Welsh Government and Transport for Wales.

The council says consideration was given to options other than night-time closures, such as undertaking the work during the day or conducting a shorter series of night closures.

However, it was determined that these options would not be feasible for safety reasons and because, in the case of the shorter series of night time works, they would cause more disturbance to residents.

A Parry Construction Co Ltd is the principal contractor for the work.

Posted by llanblogger at 7:12 PM